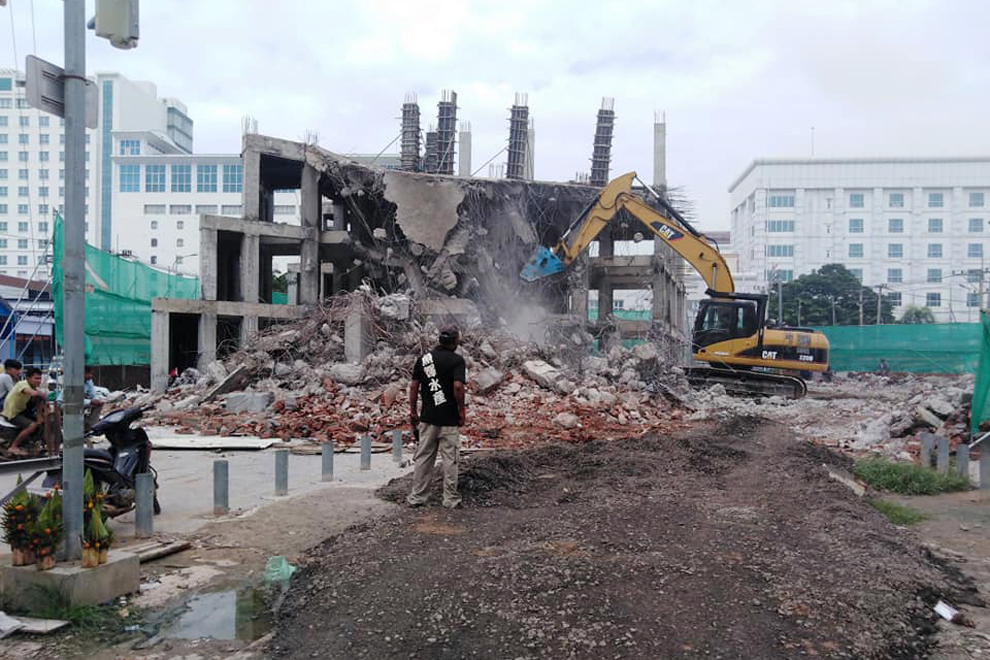 
A large sample building at the Poipet International Border Crossing in Banteay Meanchey Province was demolished after the Ministry of Interior ordered Dismantled, considering that this building was built illegally and technically wrong, built on a public park road.

According to the website of the Ministry of Public Works and Transport on October 14, the construction of buildings around the Poipet roundabout has Top 3 temple designs initiated by former Poipet Mayor San Xian Ho have been demolished since the 12th October is coming.

The same website states: "The project to build the roundabout of the top three temples has laid the foundation stone in 2018, with the main presidency as Many, as well as the participation of thousands of students. According to the plan, the construction of this roundabout will cost more than $ 500,000, with a height of 23 meters and a size of 41 meters.

Banteay Meanchey provincial governor Oum Rath and Poipet mayor Keat Hul could not be reached for comment yesterday. No, they claim to be busy.

According to a letter dated July 30, 2020 sent to Mr. Oum Rath, Governor of Banteay Meanchey Province and recently Recently published that the project to build a sample of the top 3 temples (Than Sour temple) in the roundabout of Poipet, the Ministry of Interior It is seen that due to the construction of the Poipet International Border Gate, the top three temples are already in Khmer style, so it is not necessary No more construction.

Mr. Sak Setha, Secretary of State of the Ministry of Interior, stated in the letter that in order to avoid affecting the security system of the railway barrier National Roads and Rail Transport Agreements of the Kingdom of Cambodia and the Kingdom of Thailand Banteay Meanchey Provincial Administration Must Stop Construction and Work Dismantle the building with a thorough technical inspection to prevent possible risks.

"The garden should be inspected to improve the beauty of Poipet city," he said in a letter.

Mr. Sum Chankea, Coordinating Officer of Adhoc in Banteay Meanchey Province, said that some of the projects of the authorities are always based on their own ideas. Without a clear plan and plan.

As in this case, the construction of this model building also follows the imagination and feelings of people without study.

"Building and demolishing it is no different, they want to do it," he said. They told me that the place was not suitable, so I demolished it. So nothing great destroys only the useless state budget. There is no strategy, no long-term vision called a clear principle. For me, before doing anything, I need to check the sustainability at a long time, whether that place should do or not. If it affects anything, is it not suitable for the nation? ”

As of October 15, the demolition of the Poipet roundabout is only about 40 percent after the authorities Began to demolish the upper part and some parts by fencing since October 12. This is according to Mr. Sum Chankea, who went to this location himself.