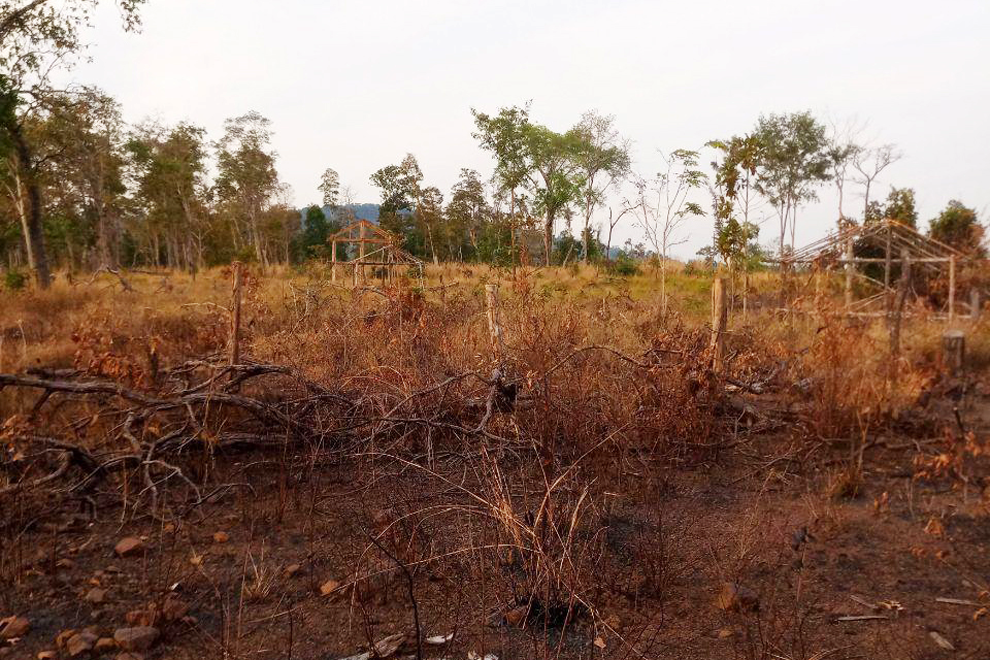 
Preah Vihear / Siem Reap: Conservationists of forest and wildlife resources claim that the acceleration of encroachment on land in the Phnom Tnaot-Phnom Pok wildlife sanctuary in some districts In Preah Vihear and one district in Siem Reap, the number of people from other provinces has increased significantly recently. This is a bad sign for wildlife sanctuaries.

Ben Devis, an American forest and wildlife conservationist at Phnom Tnaot-Phnom Pok Wildlife Sanctuary, told the Post on December 28 That people go to cut wood for business seems normal. But there are more people trying to take over the land, and most of them are migrants from other provinces, but you are not here much. There is no.

He said that according to the observation that the people who invaded the land occupied the land by cutting down trees to make poles and Spray their border markers. When he asked while patrolling, he replied that they were from Battambang province. At the same time, he also saw many border posts, which is a bad sign for Phnom Tnaot-Phnom Pok wildlife sanctuary.

"Those who invaded the land were some to get land to live on, but very few and others," Ben said. "To do business, most of them are big and rich, by hiring others to encroach on the land." However, he said that the encroached land could not be used for agriculture because it was rocky.

He added: “People are told that if they seize the land, they will share it. For example, if they invade and occupy 10 hectares of land, they will be divided in half, and in this case, we arrested two people and imprisoned them two years ago. Last week, they claimed that the land was the land of all his bosses.

According to Ben, most of the occupiers of the area were able to buy land immediately because they did not want to live there. No, the land they captured could not grow crops, not even cashew trees could survive because of the land. Lots of batteries.

Ben expressed surprise that he did not seem to understand the morale of the people who continued to encroach on the land in the sanctuary. Phnom Tnaot-Phnom Pok wildlife because it is a type of agricultural land. But the encroachment on the land may be sold to a mining company or other company. According to his observations, in December, there were people who invaded many lands in the area, with more than 50 hectares, which also affects forests and wildlife.

Song Chan Socheat, director of the Preah Vihear provincial environment department, said he had not received any recent reports of encroachment on land in the sanctuary. Phnom Tnaot-Phnom Pok wildlife, but he said that in the past he had received reports of sending two men to court and Provisional detention surrounding the encroachment on the land.

"By law, those who encroach on land in wildlife sanctuaries and protected areas will be punished," he said.

Lor Chan, coordinator of the Preah Vihear-based human rights group Adhoc, said he had received unofficial information in writing. Or reports from either side. But he said that in the Phnom Tnaot-Phnom Pok wildlife sanctuary, which is managed by the Ministry of Environment and Ben, some people have invaded and Illegal possession.

"I do not take sides, there are immigrants as well as our brothers who live in the area," he said. "It encroached on the community land, as well as the protected area and the land under Ben's care."

According to Mr. Lor Chan, if people do not have land to live on, they can apply to the authorities for a social land concession according to the availability of land. Provided by the state without encroachment on protected or conserved land.