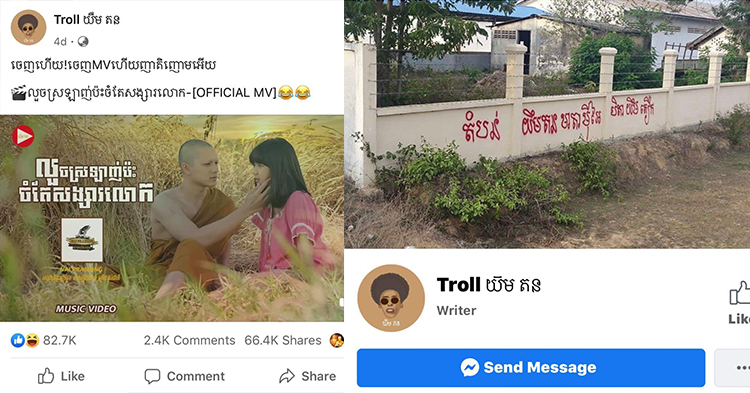 
Phnom Penh: The Board of Priests of the Kingdom of Cambodia CondemnsA Facebook account that promotes music videos with the intention of tarnishing the image of Buddhism. On the morning of Thursday, July 16, 2020, the Secretariat of the Board of Directors of the Kingdom of Cambodia confirmed that according to the information of the Facebook account manager Troll Yim Ton is a right-minded person, not Yim Ton, who has a mental illness in Kampong Speu province, often walks around writing on the walls of factories or other buildings. No. Please relatives, please do not be confused.

The Board of Priests of the Kingdom of Cambodia has requested the Ministry of Cults and Religions as well as the relevant authorities to take legal action against Facebook account holders. Troll Yim Ton, the owner of this Facebook account, trampled on the values ​​of Buddhism and Khmer monks.

In a statement on Wednesday, July 15, 2020, the Board of Trustees highlighted that Troll Yimton's Facebook account posted a clip The video was posted on social media as a song mixed with obscene images of Buddhist priests with women using words in Deliberately attacking content destroys honor, dignity, as well as the values ​​of Buddhism, the state religion.

The Board of Priests considers this act to be a serious insult to Theravada monks in Cambodia, as well as to the Buddhists. Extremely for this unfortunate and degrading act.

The Board of Priests emphasized in the statement that the photos of the person whose Facebook account was attached to the woman were The clergy at all levels have already dealt with the rules and regulations, some of which are images of foreign priests and some of which are images of non-priests. No mistake was made to insult and humiliate the song in a cruel and unjust way.

The Board of Trustees noted that Troll Yimton's Facebook account committed the same tragedy several years ago, taking the reprimand of Priests in their profession fully intend to destroy the honor and dignity of monks, as well as the values ​​of Theravada Buddhism in Cambodia, which the Board of Priests Cambodia is absolutely unacceptable.

The Board of Priests vehemently denies and condemns immoral acts, immorality, inhumanity and inhumanity, and requests the Ministry of Cults and Religions and the competent authorities Take action against the above Facebook account manager in accordance with the legal procedures in force.

At the request of the Board of Directors, the Ministry of Cults and Religions submitted a request to the Minister of Information, Mr. Khieu Kanharith, to remove the video in Troll Yimton's Facebook account and Troll Thief's YouTube account OFFICIAL posted a music video for "Love Touches Girlfriend" He on June 25, 2020 and July 11, 2020.

Troll Yimton's Facebook account and Troll Thief's YouTube account OFFICIAL posted a music video for "Love Touches Girlfriend" On June 25, 2020 and July 11, 2020, images of monks and women with bad intentions denigrated the value of Buddhism as a religion. Of the state through this song, which has a picture and meaning in evil will, incites discrimination, causes chaos and affects public order Social. In this regard, the Ministry of Cults and Religions requested the Minister of Information to review and take legal action to delete the video posted in the Troll and YouTube above. 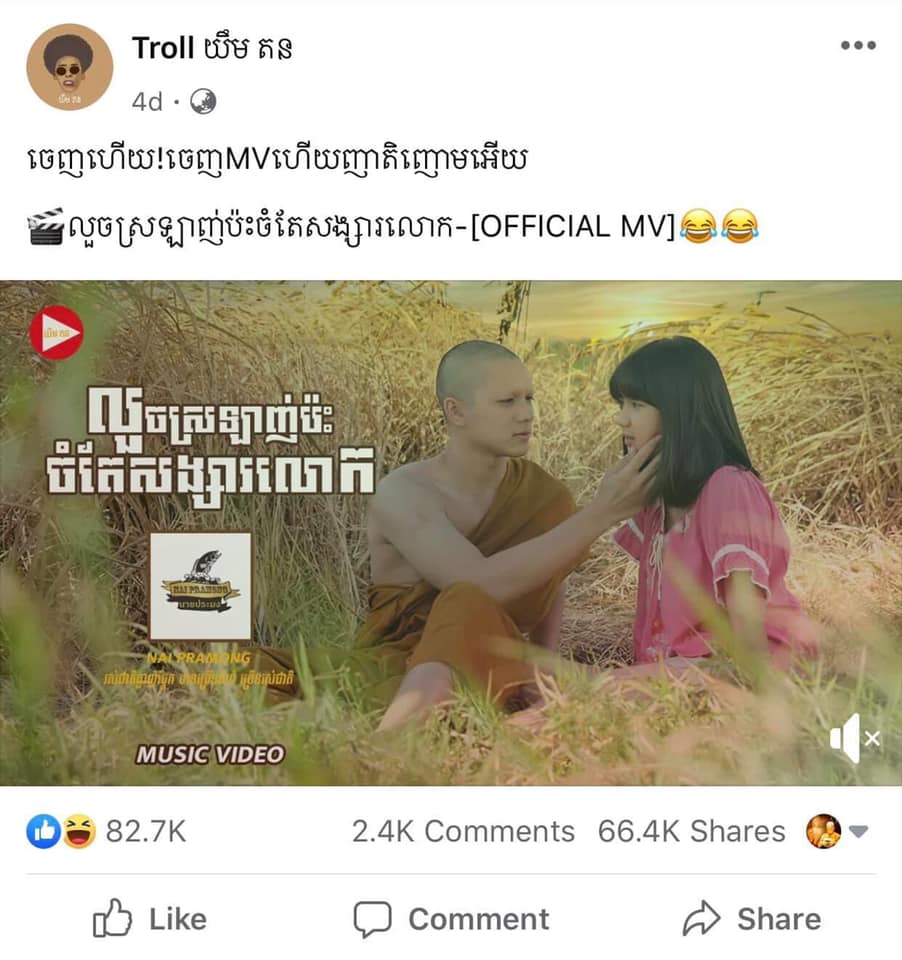 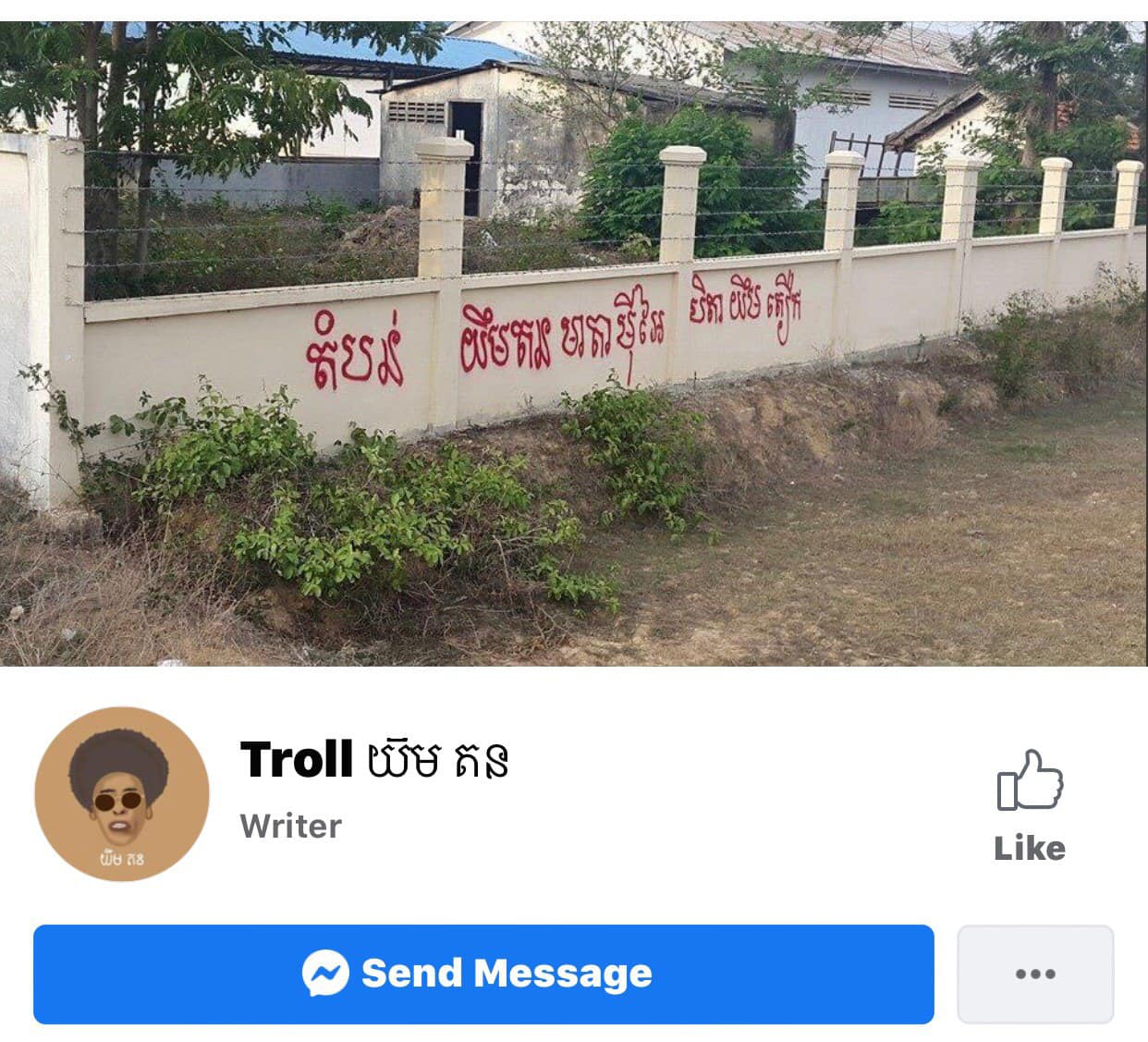 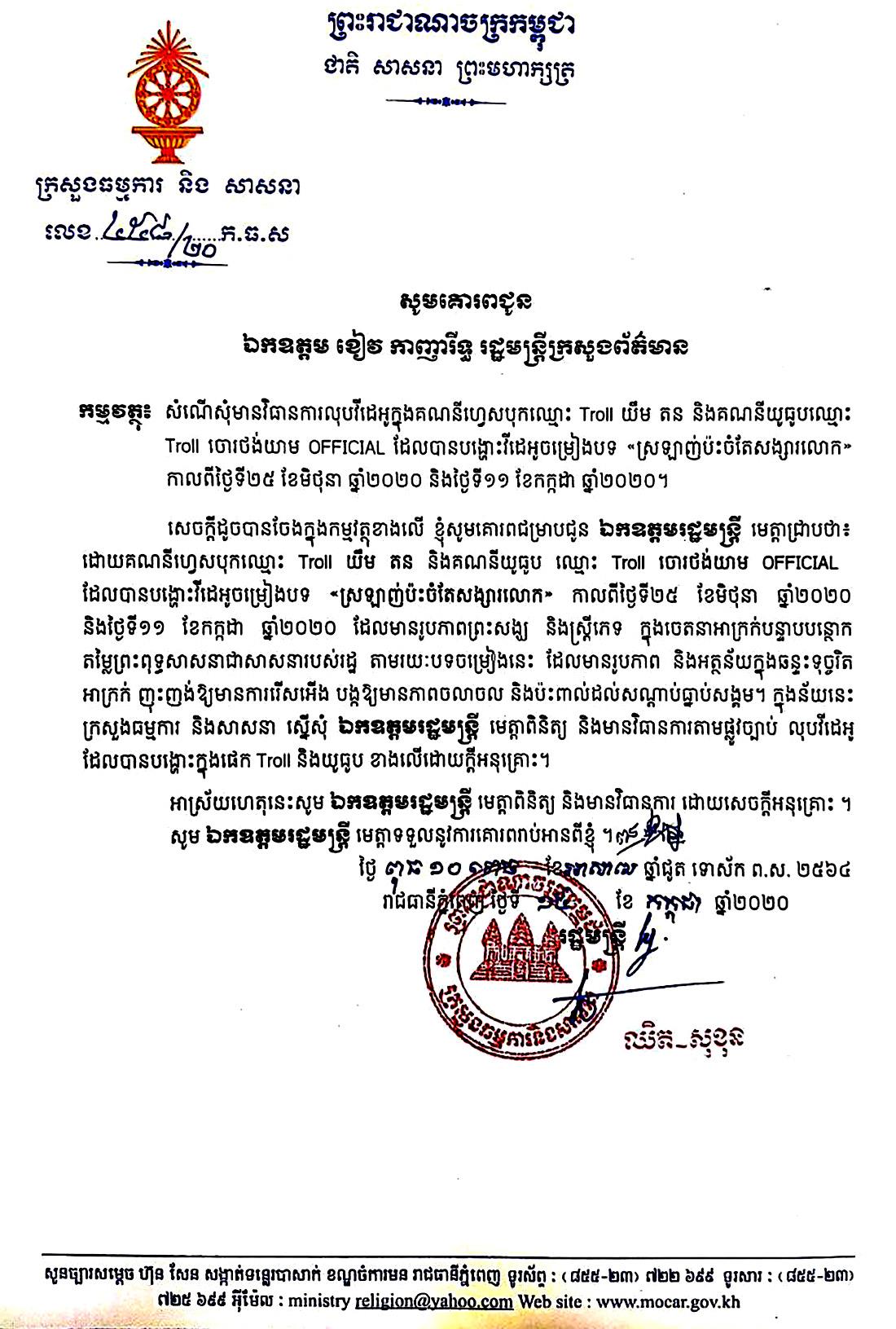 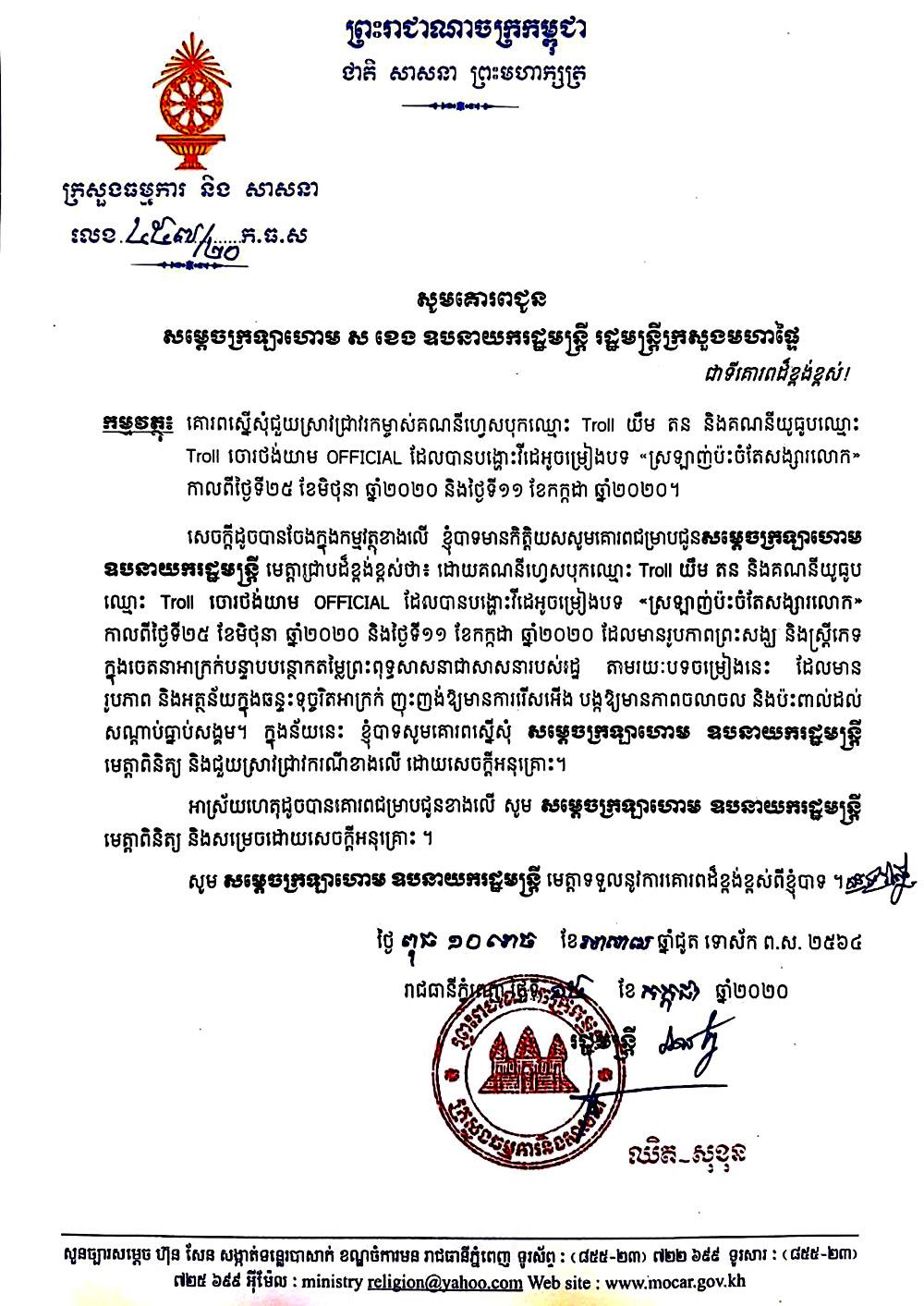 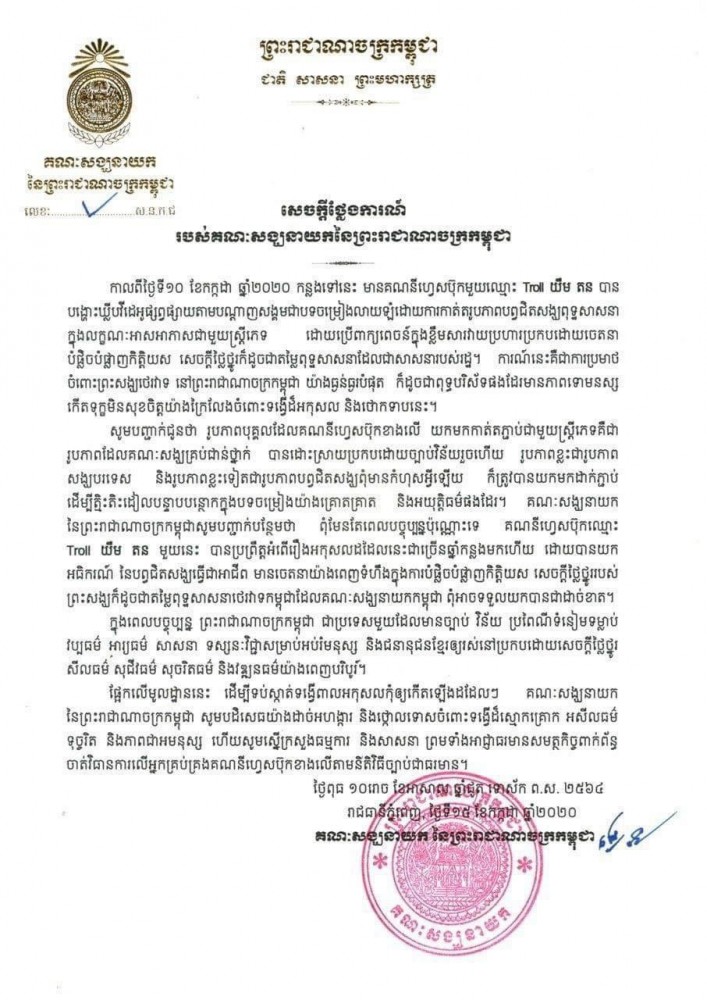