Communities and authorities call for forestry and wildlife conservation 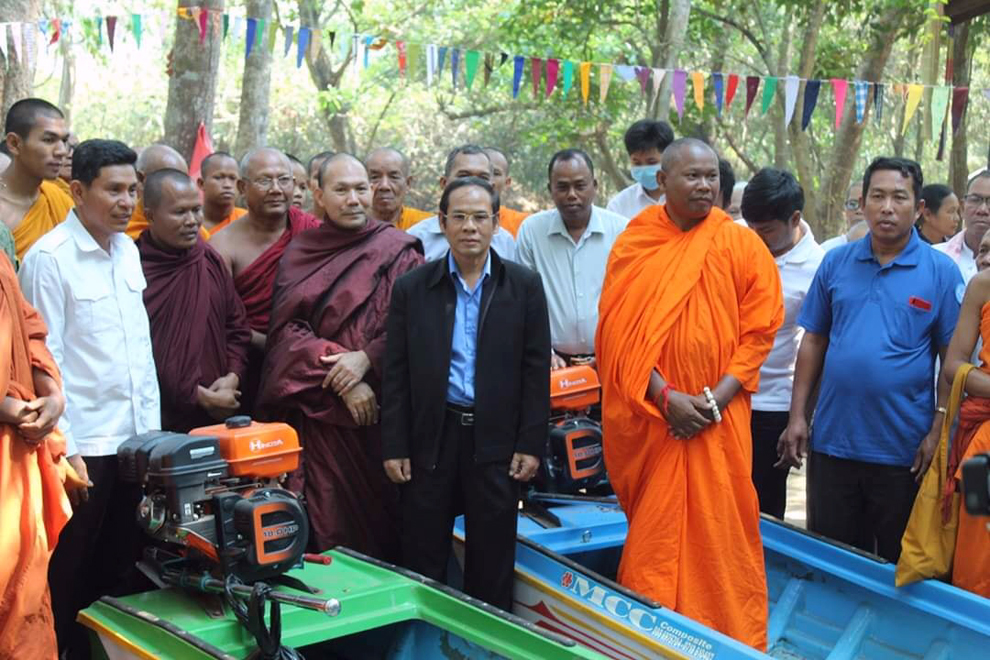 Communities and authorities call for forestry and wildlife conservation


Oudom has the advantage: The Community of Prey Veng, Preah Vihear, and related authorities in Oddar Meanchey province on February 2 called on local and foreign residents to join in the protection and conservation of the forest. And wildlife for the benefit of the nation, both now and in the future.

In celebration of the 19th Anniversary of the founding of the Prey Veng Prey Veng Community, which was held on Sunday, Venerable Bun Saluth Oddar Meanchey province chief and chief of the Prey Veng Prey Veng community says there are four challenges to the protection and conservation of natural resources. In the territories Wildlife Monitoring, including forest fire, deforestation, wildlife hunting and fishing in protected areas Illegal.

“These issues are not just the loss of forests and biodiversity, which are habitats and fodder for wildlife and fish,” he said. Not only our wildlife and wildlife, but also the hardwoods and the rare species. It's almost gone. ”

According to Venerable Sovath, most natural resource offenders use traps, electric shockers and explosives. Thousands of vehicles are seized and seized each year. He called on the people who have committed these offenses to put aside optimism and join in the defense Conservation of natural resources with his community for the benefit of all mankind.

He added: "Let us put aside the bad ideas that affect ourselves and the community, including society. Destined to perish. We must work together for the good of the community and for our nation and the whole world. ”

On that occasion, Phuong Lina, director of the Oddar Meanchey Provincial Department of Environment, also said that protecting natural resources in wildlife sanctuaries is not an exclusive role. Of the forest protection community or the rangers of the Department or the Ministry of Environment, but the role and overall responsibility of the stakeholders .

“In fact, out of all our wildlife habitat in Oddar Meanchey province, there is a forest of monk forestry,” he said. Best of all because local communities, civil society organizations and relevant authorities, as well as professional bodies, work well together to protect, preserve and survey Track and block The offense on a regular basis.

At the same time, he conceded that a violation of natural resources still exists in the wildlife sanctuary and demanded Together we can fight against this by enforcing the law effectively.

According to Lina, last year, besides enforcing patrols, preventing and suppressing forest and wildlife crime, the rangers of the monk's wildlife sanctuary Forestry planted 3 hectares of rosewood to restore this luxury forest and arranged excavation of protected areas and trails For forest fire protection Approximately 70 per cent of the total area of ​​30 256 hectares of land in a wildlife sanctuary as well.

Mr. HUN Manit, Deputy Governor of Oddar Meanchey, urged the relevant authorities to strengthen law enforcement and better cooperation with local people, especially Together with the Prey Veng Prey Veng community and the rangers in Oddar Meanchey province to conduct research on cracking down on natural resource crime as well as conducting education. Find broadcasting laws. He called on the community to hand over the illegal equipment they had concealed for past offenses To avoid legal challenges.

Also, in commemoration of the 19th anniversary of the establishment of the monk's headquarters, the Committees of the community including More than 200 attendees also grazed some trees in the core area of ​​the monasteries. Among them are the canopy, which stretches to Tropica Thnong sokrom.