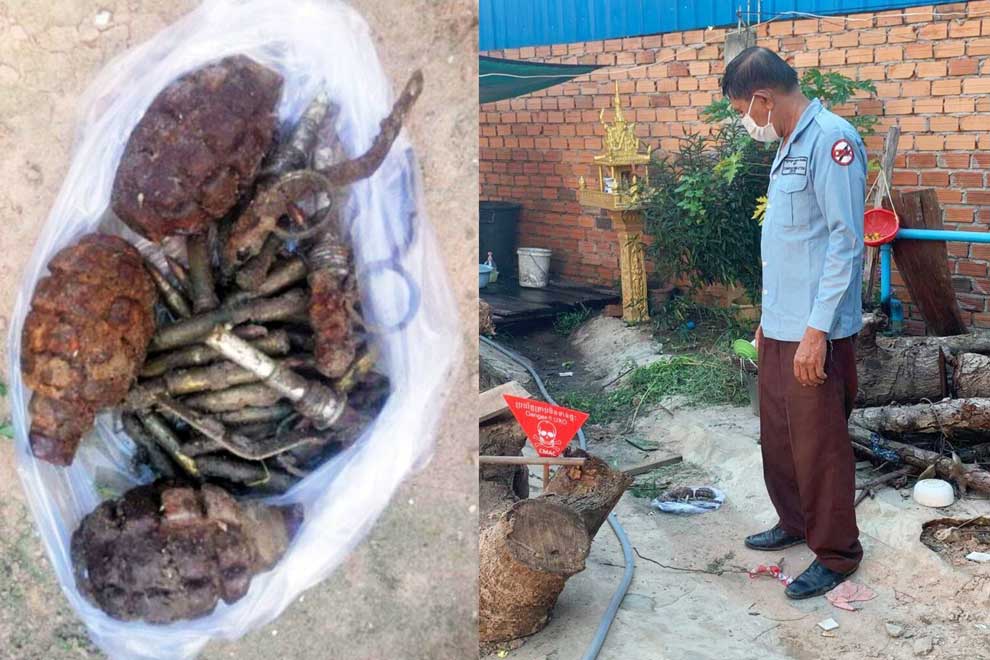 
Siem Reap: CMAC officials in Siem Reap province on July 17, 2021 went to collect 30 old bullets in Trapeang Ses village, Kork Chak commune Siem Reap after the bullets fell from the ceiling of an old house of an uninhabited police officer.

An Sothea, chief of the 4th Mine Action Unit in Siem Reap, told the Post on July 18 that his officers had gone to collect ammunition in The home of a long-abandoned and dilapidated police officer who has already been stored at CMAC's location will be ready for demolition. Cannot be left there as it can be life threatening.

The ammunition collected included three No-36 grenades and 30 unidentified ammunition. However, he did not know when the history of these bullets was left behind.

An Sothea said: “I also asked the officer about the bullet, he said that the bullet came from the police house without You live and fall from the roof of the house when the wood of the house falls down. "When the police saw him go out for coffee on Saturday, they called my officer."

However, Mr. An Sothea told the official that it was necessary to conduct a proper inspection because it could be accused of involving Taking hidden bullets and the owner of the bullets can escape the law.

Pheng Chendareth, head of the Siem Reap provincial police's minor criminal division, said he also received information about the discovery of the bullets at home. A policeman, but an old bullet and left a long time ago.

However, Mr. Pheng Chendareth confirmed that no police officers from the Siem Reap Provincial Police went to investigate this case because it was an old grenade. May be left over from the war.

According to Mr. An Sothea, in 2021, CMAC experts in Siem Reap province collected unexploded ordnance, landmines and grenades. Many bullets after receiving reports from local authorities and local residents.

In early July, 505 UK-made 365 grenades were found buried next to the fence of 10 Makara High School. In the center of Siem Reap.