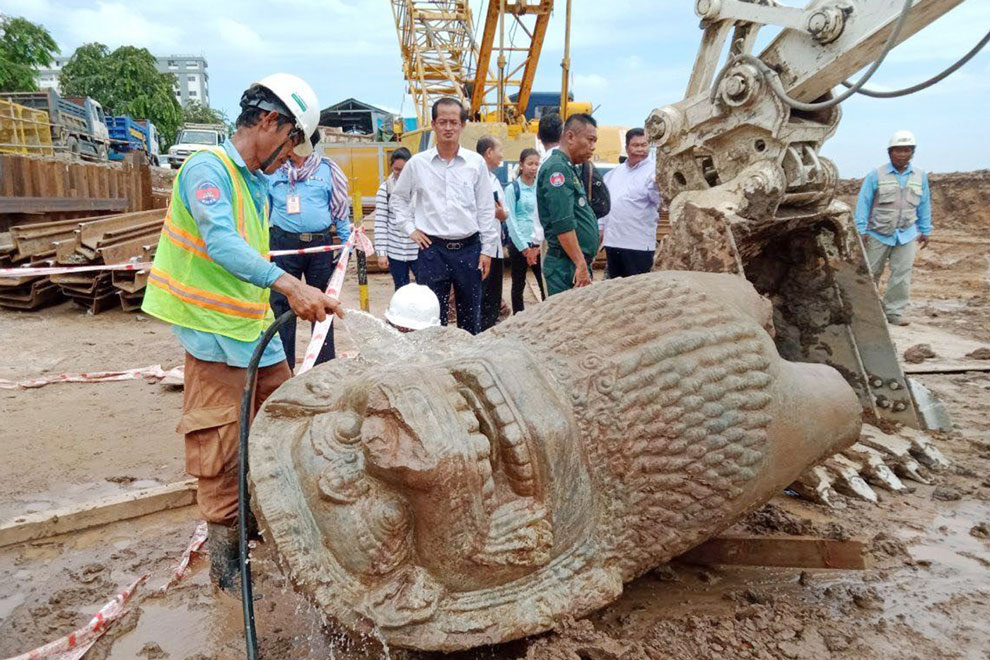 
Phnom Penh: Heng Ratana, director general of the Cambodian Mine Action Center (CMAC), said the ancient stone lion statues found by the demining operation had been sent to Holds the Ministry of Culture and Fine Arts last weekend.

According to Mr. Ratana, the ancient stone was found during excavation to implement the development project of the construction site of the groundwater reservoir and construction Phnom Penh's sixth pumping station is next to the Tonle Sap in front of the Council for the Development of Cambodia.

"The ancient stone lion statue was found more than four meters deep in the ground," he told the Post yesterday. The shape is broken into two parts. "Now the Ministry of Culture is accepting it as if it were being kept at the National Museum."

He added that this is not the responsibility of CMAC, so CMAC transferred to the competent institution responsible for this issue. 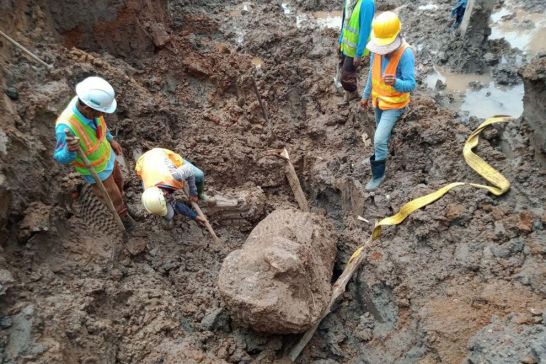 A stone lion statue that Simac dug found in the ground. Photo by CMAC

Hab Touch, director general of cultural technology at the Ministry of Culture and Fine Arts, told the Post yesterday that he had not seen the ancient stone lion statues. However, according to the information received, he said that the lion statue has a style similar to the lion at Wat Phnom. But he said: "I understand that it is not a lion at Wat Phnom, because the lion is very big, so it should be there. "So that place really has something like a bridge with lion statues."

Regarding the ancient stone lion sculpture, Chhay Visoth, director of the National Museum department, told the Post that he could not yet reach a definitive conclusion. No matter what era the stone lion was in, it took more time to examine the composition of the ancient stone.

He said: "We can not say that because the lion, we just saw when they cleared the bullets for the construction project. So we lost some contact with the lion statue. "Normally we can make a guess date until we need something else around it that we can see."

Mr. Visoth said that this ancient lion statue is a bit difficult to conclude, do not know when the design of the statue. This case is suspected that the lion statue was built at the time of Wat Phnom or may be a copy of the period after the French rule in Cambodia.

According to Chhay Visoth, the ancient stone lion may have been a sculpture taken from another area, especially Angkor. He said: "Now we are suspecting that it may come out of the Bakheng temple, because if you look at the lion. Well, it's large, almost 2 meters high, so we need to verify the time of the verification study to be able to work. Conclude that it is for sure.