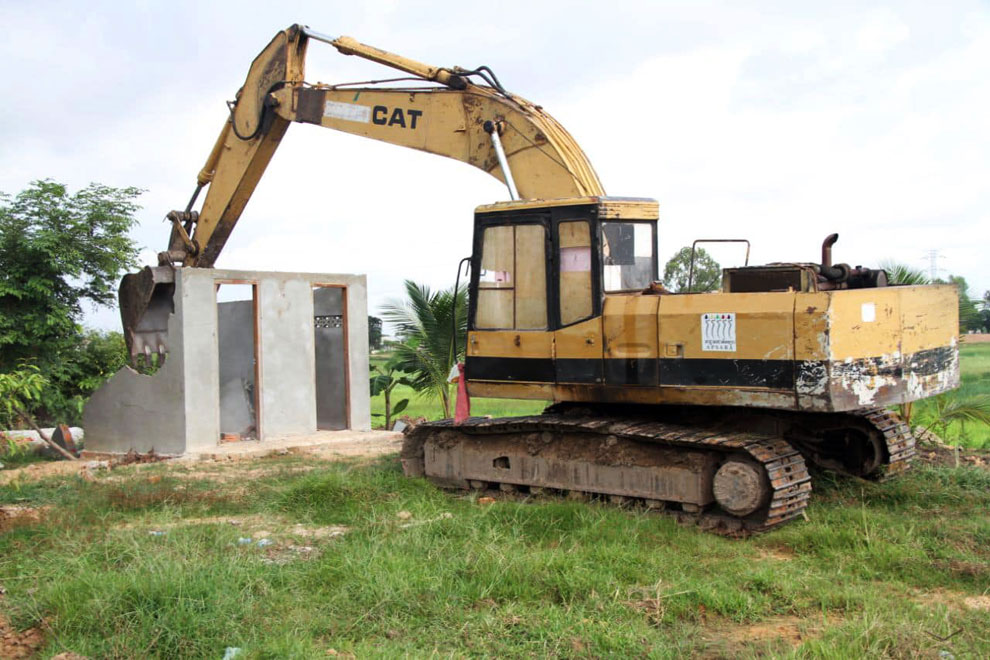 
Siem Reap: APSARA Authority, in cooperation with the Siem Reap Municipality, demolished the building of Khun Sokhon, saying that it was built illegally. Take Trapeang He Phka Archaeological Site as a private property in Bos Kralanh Village, Sangkat Chreav, Siem Reap City, Siem Reap Province. However, the owner of the building claims that it is the land inherited from his ancestors and left to his descendants.

Long Kosal, Director of the Dissemination Department and spokesman for the APSARA Authority, said yesterday that the APSARA Authority cooperated with the Siem Reap Municipality and Siem Reap Provincial Court on September 1 carried out the demolition of Mr. Khon Sokhon's construction, such as stone fences, bathrooms, toilets and destroyed some crops because individuals This photo was taken illegally, as if attempting to privatize the land of the Trapeang He Phka archeological site.

He said that the demolition of illegal buildings for the second time to prevent attempts to illegally take the land of Trapeang He Phka archeological site. It is privately owned. The joint task force dismantled the land and agreed to stop all construction by the owner once in November 2019, but This citizen is still building again.

"We remain committed to the fact that, however, the authorities must oppose any attempt to encroach on the site," he said. It is a public property of the state that must be protected, and what Khun Sokhon has done twice has been severely affected. "The heritage of our national heritage."

Siem Reap municipal administration representative Hai Yong, who participated in the demolition operation, said on September 1 that Siem Reap municipal authorities planned to develop The location of Trapeang He Phka will be revived soon. This project is done by rehabilitating the flower pond to be a source of water for the villagers to use, with the permission of the municipal authorities. In principle, from the Apsara Authority already.

He said that the land of Trapeang He Phka is 350 meters long and 170 meters wide, with the back of the dam 40 to 60 meters. This pond has existed since the Angkorian period as a community inhabited because there are fragments of ancient pottery scattered throughout this archeological site. To the south of the pond is also a brick temple, which is made of brick and is worshiped by the people of that time.

"Arbitrary violations belong to him, that person is responsible before the law according to the situation of destruction," he said. That affects those cultural properties.

He said that in 2019, he agreed to hand over the land to the APSARA Authority. At that time, he also agreed to dismantle all his buildings by himself until September 9. But before the deadline, the APSARA Authority suddenly deployed the police and used a tractor to dismantle and destroy his garage and bathroom. . Authorities also destroyed many of his crops and fruit trees.

Mr. Sokhorn said: "And I said I would remove my fruit trees myself, which set the right date, but the authorities turned It is very unfair to destroy all my crops like this. I would like to request the APSARA Authority to apply the law equally, because that area also has hundreds of families. So you have to apply the law like me, why apply the law only on me.