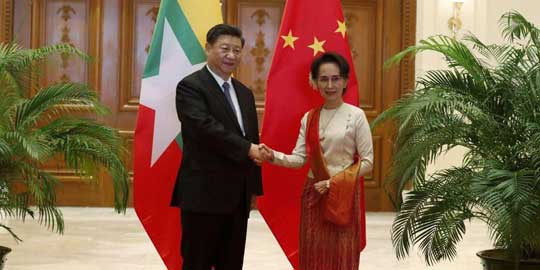 Banned by the West since the crackdown on Rohingya in 2017, described as "genocide" by the United Nations, Burma or Myanmar can rely on strong allies. That one is China. While the International Court of Justice in The Hague is scheduled to take action on Thursday, January 23 on "urgent measures" to be taken against Myanmar, President Xi Jinping made a two-day visit to the country on January 17. It was the first visit by a Chinese head of state since 2001. Upon his arrival, Xi spoke of "injustice and inequality in international relations."

According to Le Monde, published on January 20, 2020, it is surprising that China appears to be focusing more on the visit announced by Beijing than the Burmese authorities themselves. On top of that. During the week, the Chinese press wrote a front-page article highlighting the importance of bilateral cooperation, sometimes expressing the need to force aid to Burma.

China not only has its key partner position, but also its neighbor India, but also builds infrastructure there that will allow it to connect directly to the Indian Ocean through the Strait of Malacca. The corridor, described by Xi Jinping as "one of the priorities" on Friday, is an integral part of the "New Silk Road", a gigantic international investment program that has been set up Posted by Xi Jinping in 2013 In Burma, it is notably related to the establishment of a large industrial area and a deep-water port at Kyaukpyu in the western state of Rakhine, where the Rohingya were established.

During the visit, Xi Jinping and the head of the government, Aung San Suu Kyi, started 33 agreements. Details have not been revealed, but there are some concerns regarding Kyaukpyu and the railway, which should link the port to Yunnan province in southwest China. Oil and gas pipelines have already been built there, bringing gas and oil to China. Update: October