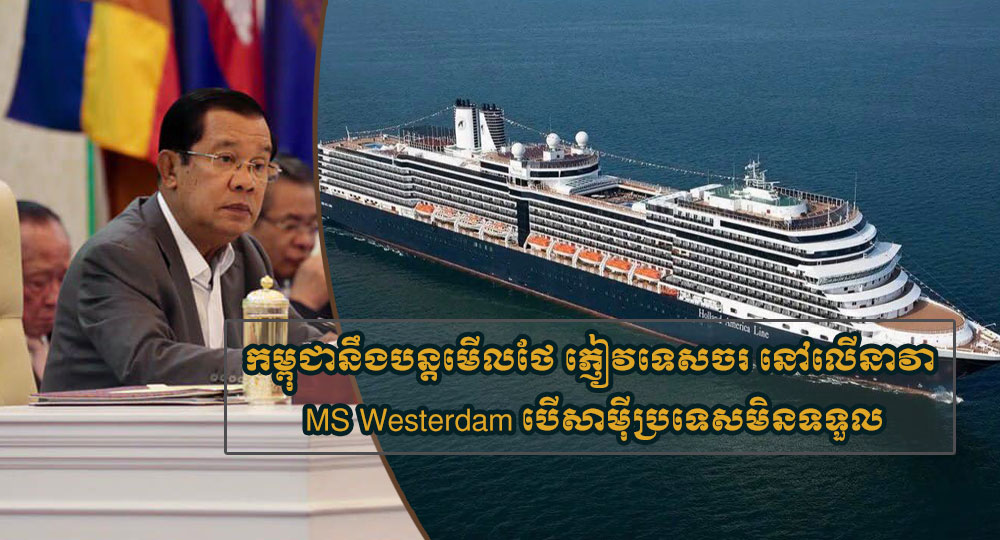 Phnom Penh: Cambodian Prime Minister Samdech Akka Moha Sena Padei Techo Hun Sen announced on February 17, 2020 that Cambodia would continue to look after tourists on the MS Westerdam if the country did not receive it.

Samdech Techo Hun Sen wrote on Facebook on the afternoon of 17 February 2020 "For more than 2,000 yachts that have arrived in Cambodia, and if they do not receive them, they will continue to look after them."

At the working session of the Cambodian National Council for Women at the Peace Palace, Cambodian Prime Minister Samdech Techo Hun Sen spoke about COVID-19 (the official name of the new coronavirus), which is plaguing and shaking the situation in Cambodia. Countries in the region and the world are terrified of losing their virtues, morals, humanity and good friendships.

Prime Minister Samdech Akka Moha Sena Padei Techo Hun Sen affirmed that the real disease we are facing now is a disease of extreme fear and extreme racism, even abandoning one's own people. In fact, as was the case with the MS Westerdam, with more than 2,200 multi-national passengers denied by six countries and six islands, the ship was also home to more than 600 Americans. Landing on the island of Guam, part of the US territory, is also not allowed. How did that island nation and the island nation achieve this? Where would the world be, and where would the value of human life be?

Cambodia's decision to get the MS Westerdam to land in Sihanoukville in the Cambodian territory is a non-racist humanitarian gesture to promote respect for human rights by providing a lifeline for humanity. Which is stuck in all ships. The correct decision of Cambodia is that most people around the world support the humanitarian work of the Kingdom, with the support of the World Health Organization, World Tourism Organization, the most beautiful beach organization. The World's Most Beautiful Bay and also President Donald Trump. At this time, a total of 500 multinational tourists, after a medical check-up, found no positive signs of the Kovirovirus 19 (Corona), who were given temporary accommodation at the Sokha Hotel in Phnom Penh. Clearly, if the country does not care about its citizens, Cambodia will be responsible because it has come to safety in our country.

Samdech Akka Moha Sena Padei Techo HUN SEN made it clear to all travelers in Sihanoukville that if any of them were infected or infected with HIV-19, Samdech Techo was allowed to enter Cambodia as soon as possible. Take them to a safe place to provide care and treatment as early as possible. This was done to prevent the spread of the virus to others, as happened on the Diamond Princess cruise ship, which had recently taken off from the ship due to the presence of 19 infected kiwis. Each one increased to 356.

If Cambodia does not get the ship to land so far, it is unknown where the food is, and the oil is almost gone. Will the end of their lives be cremated on the ship or thrown into the sea? If everyone refuses to get them down? But Cambodia cannot close its eyes to the deaths of the people, as Cambodia has previously been despised and discriminated against, and it is clear that this is the case for all tourists. We all talk about human rights, but right now, the stigma is huge, proving that discrimination and excessive fear are leading to real human rights destruction.

According to the project, which is supposed to help all tourists, after the first phase, who are temporarily staying in Phnom Penh, leave for Cambodia, and will be waiting for passengers in Sihanoukville. Come to Phnom Penh for the rest. Passengers will be subjected to a thorough medical examination before being allowed to stay in the hotel. Despite the long-term demand, Cambodia offers the opportunity for the cruise ships to stay in the country regardless of their fees and services on the Cambodian coast.

Cambodia is responsible for the work it is doing most thoroughly and continues to work with partner organizations and the international community to jointly address this global challenge. At the same time, to eliminate the scourge of extremism and prejudice, to promote moral values, virtue, and the right to life and well-being of humanity throughout the world.

Samdech Techo Hun Sen also confirmed that “In any country, not only China, if Cambodia is needed, Samdech Techo will attend without hesitation.

At the same time, Samdech Techo Hun Sen intends to host a party for the passengers who are aboard the MS Westerdam to know the true heart of Cambodian humanity.

After a thorough medical examination of some tourists who did not have the positive sign of the Kovirovirus 19 (Corona) at this time, the Royal Government of Cambodia has allowed 500 tourists to temporarily stay at the Sokha Hotel in Phnom Penh to arrange airfare. Leaving Cambodia and returning to their homeland.

Meanwhile, Samdech Techo Prime Minister suggested that Phnom Penh Municipality in collaboration with Ministry of Health and relevant institutions to arrange transport of tourists in Phnom Penh to visit Phnom Penh, which is better than staying in a hotel room. Feeling overwhelmed by the fear that they might be able to take the waiting time out, they could relax Happy in Phnom Penh and getting to know our country and our people even more.

In order to show the love, warmth and true heart of Cambodia to all visitors from the MS Westerdam, Samdech Techo Hun Sen intends to hold a banquet for them, and Samdech Techo is also planning to invite the representatives of the country's ambassadors. Each person who has his or her citizens stranded in Cambodia on this cruise has the opportunity to visit and participate in various ways To assist its citizens to return to home country.

Of course, for more than 2,000 yachts that have arrived in Cambodia, Samdech Techo Hun Sen has made it clear that if the country is not responsible, Cambodia will continue to look after them. They are until the day they return home.

Having been a taro