Cambodia, China push for consultations in order to facilitate their respective countries before 2020 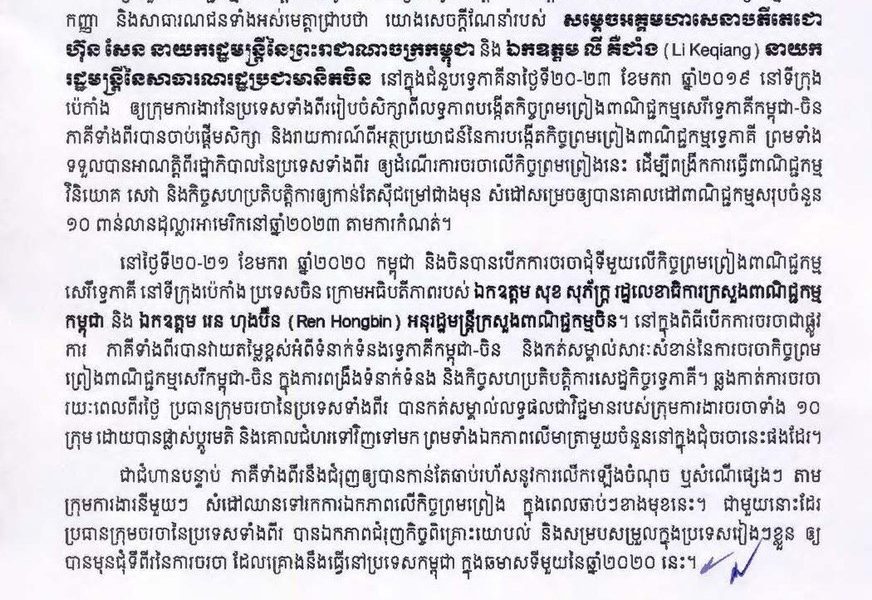 Cambodia, China push for consultations in order to facilitate their respective countries before 2020

According to a press release from the Ministry of Commerce on January 28, 2020, Cambodia's Prime Minister Samdech Akka Moha Sena Padei Techo Hun Sen and Chinese Premier Li Keqiang at the 2019 Bilateral Meeting in Beijing The two countries' working groups on the feasibility study of the Cambodia-China Bilateral Free Trade Agreement began Report on the benefits of establishing a bilateral trade agreement and get the two governments' mandate to negotiate on this agreement to expand trade, investment, services and cooperation in a deeper way to achieve Total trade target of $ 10 billion by 2023.

On January 20-21, Cambodia and China held the first round of bilateral trade talks in Beijing, chaired by Sok Sopheak and Wen Hongby, at the official opening of the two-party talks. Highly appreciated the Cambodia-China bilateral relationship and noted the importance of the Free Trade Agreement negotiations – China to strengthen bilateral relations and economic cooperation.

During the two-day negotiations, the heads of the two countries' negotiators noted the positive results of the 10 negotiating groups, exchanged views and stances and agreed on several articles in the round. Negotiate this too.

"As a next step, both sides will promptly push forward the proposal or proposal by each working group to reach an agreement in the near future," the ministry added. At the same time, the heads of the two countries' negotiators agreed to advance their respective consultations and coordination before the second round of negotiations scheduled to take place in Cambodia in the first half of 2020.