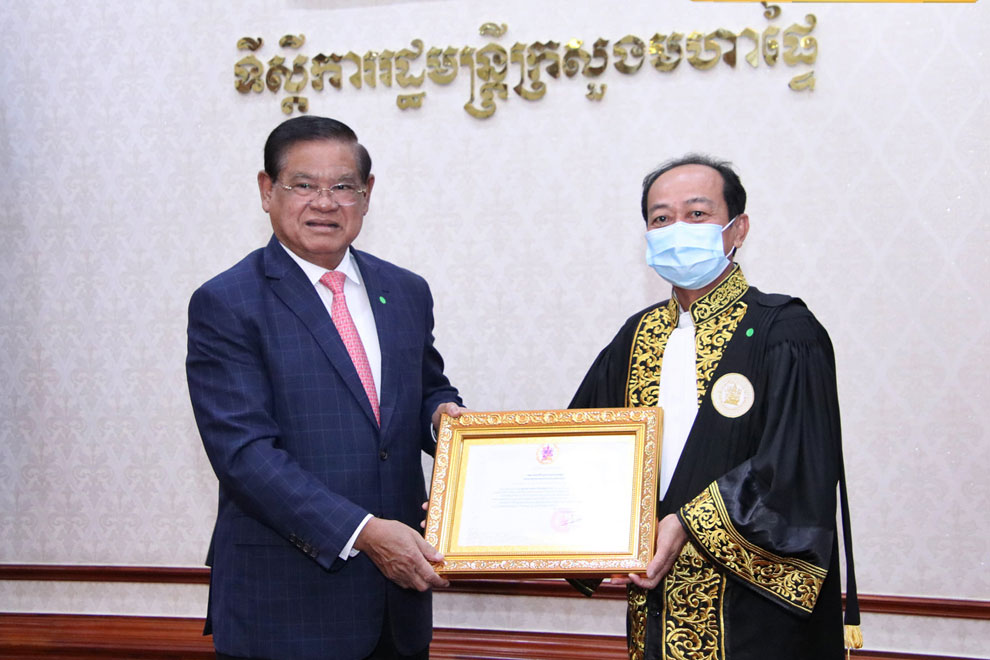 
Phnom Penh: The President of the Bar Association of the Kingdom of Cambodia, Mr. Suon Visal, yesterday requested the Minister of Interior, Mr. Sar Kheng, to assist the Bar Association for professionalism. This is even stronger by allowing lawyers to have more access to clients at the police station, as some places are not yet. There has been good cooperation in the past. According to Sar Kheng's Facebook page.

Mr. Sar Kheng continued on Facebook: "He [Suon Visal] also asked the prince to check the possibility for a lawyer to be stationed at each police station. To be able to give legal advice to avoid problems when sending the case to court.

In response to this request, Mr. Sar Kheng said that the Ministry had previously assigned Mr. Bun Hon, Secretary of State of the Ministry of Interior, to study and arrange for a lawyer in According to the provincial and district administrations that have a lot of problems to help avoid the implementation of some work different from the procedure. He will continue to provide support and coordination so that lawyers can work smoothly and consider a number of other proposals.

Liv Sovanna, deputy secretary general of the Bar Association of Cambodia, said yesterday that under the Code of Criminal Procedure, suspects could have the right to have a lawyer after 24 hours. Detention. However, if a lawyer is present at the police station within 24 hours, the lawyer can serve two purposes: to provide counseling Provide legal advice to suspects and assist authorities in building a solid evidence base.

He said: "At the judicial police stage, his answer [the suspect], even if there is evidence, if there is legal advice. The involvement of the suspect's lawyers helps to strengthen the evidence. The lawyer on duty may be an assistant lawyer for the judicial police. For example, the judiciary police need lawyers, lawyers, whether to prepare a case file to gather evidence or to conclude what it is. Should be detained or not detained and so on. He can consult, but this is not an order.

He said that the presence of lawyers at the police office, it helps to strengthen the capacity of judicial police officers and make the case that judicial police officers send to court. Effective and reliable. He said that the Law on the Statute of the Law states that the lawyer can visit the client in all circumstances, but the Code of Criminal Procedure allows the suspect to see the lawyer after his arrest. 24 hours. This point is seen by lawyers as a restriction.

He said: "In the past, some judicial police officers, he allowed the lawyer to accompany the suspect to answer like that. However, a large number of units did not do so, as he understood that without detention, lawyers would have no rights at all. However, he was arrested and after 24 hours of detention, the suspect has the right to have a lawyer. This is a different practice. ”

Ouk Vandeth, a lawyer, said yesterday that some countries allow lawyers to be present immediately when a suspect is arrested. Arrested. Article 98 of the Code of Criminal Procedure should be amended.

"It is up to the Ministry of Interior and the National Police to weigh in on whether allowing a lawyer to meet first has consequences," he said. What about his work. But I think when a lawyer comes to see him in his proceedings, his work is stronger because there are lawyers as witnesses in the case. That's it. Some clients often say that the police abuse them and force them to answer. We want to eliminate all the words, so we want to work with the police officers. In order not to say that police officers are always wrong.

However, Chhay Kim Khoeun, a spokesman for the National Police, explained that authorities only follow the code of criminal procedure. For crimes, it is difficult for the authorities to allow a lawyer to meet 24 hours before because the authorities have not yet questioned and investigated clearly, and such crimes can occur Many stakeholders. But in the case of misdemeanors or misdemeanors, the authorities always cooperate with the lawyer.

"We are not limited to cooperating to protect human rights, protect suspects and contribute to the effectiveness of police operations," he said. . To be honest, in the operation of the police, the suspect was arrested and the lawyer came to protect the suspect. The police, because he came, he was only looking for clues to protect his client. But we do not hesitate, if there is a principle from the leadership and there are rules, we do that.

Chin Malin, spokesman for the Ministry of Justice, said yesterday that if there was a request from the Bar Association for an amendment regarding allowing a suspect to meet The lawyer will discuss with all stakeholders, including the Bar Association and law enforcement officials.