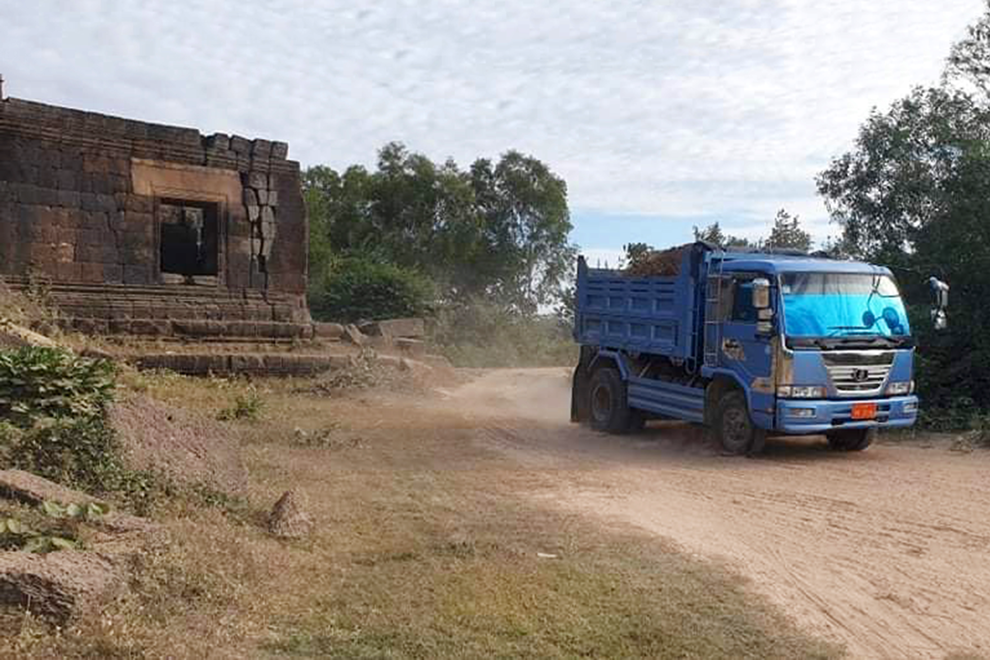 
Takeo: Samrong district authorities yesterday warned to take legal action against the owners of the tractors and trucks that encroached on the land. Illegally transporting land through Sen Phouvang temple in Ampil village, Sla commune, Samrong district, Takeo province, which may cause damage to the temple.

The warning came after authorities seized an excavator on January 3 that entered the temple's cultural reserve. Sen Phu Vang without asking for permission.

Ket Mao, the governor of Samrong district, said that on Sunday morning, he received information that some villagers had rented a machine to take farmland. At a distance of about 200 meters from the temple. After receiving the information, he sent a deputy district governor, together with the commune authorities and the administrative police, to stop the land truck but seize the truck Unable to stop a machine digging.

Sla commune chief Mr. Khim Hul said that in the morning of January 4, the commune authorities together with the director of the Department of Culture and Fine Arts educated To the owner of the excavator and the owner of the truck, stating that from the date of this instruction, any machine is not allowed Come and carry the land in front of Sen Phu Vang temple, because it is a national heritage site, can cause vibrations or earthquakes that can affect To the temple.

"If the second time is not allowed, it must be resolved in accordance with the law and we are the authority," he said. The commune does not just dare to make a law for them to be transported illegally, ”he said.

He said that the owner of the excavation machine entered the land without asking permission from the commune authorities, this is a difficult problem for the authorities Commune.

Mr. Khim Hul said: “It is very difficult for the people to see the land tilted to one side, so where does he go? As for the digger, he did not tell the commune. To be honest, the commune does not know, and I tried to spread the word to all the village chiefs, but they stole it on Saturday and Sunday, ”he said.

Mr. Chhuon Nget, the owner of the excavator in Ampil village, Samrong district, admitted that he did enter the excavation without asking permission from the authorities. The commune is true.

"At first I asked him, but when I last moved, I did not ask him," said Nget. . But obviously the land transport did not affect the temple. "Because that road is an old road, they used to run before to transport various agricultural products by bullock carts along that road."

According to Mr. Chhuon Nget, entering the land, he did what the people rented and he did not know that it was a heritage site of National and can have a serious impact on the temple.

Director of the Department of Culture and Fine Arts of Takeo Province, Mr. Chet Pisoth, said that according to the inspection of the temple, there is no impact yet, but the land transport Near the temple, encroachment on cultural conservation land is wrong.

Mr. Pisoth said: "Carrying land through near the temple, it may affect the future, such as affecting the roof, it may collapse or Where are the cracks? ”