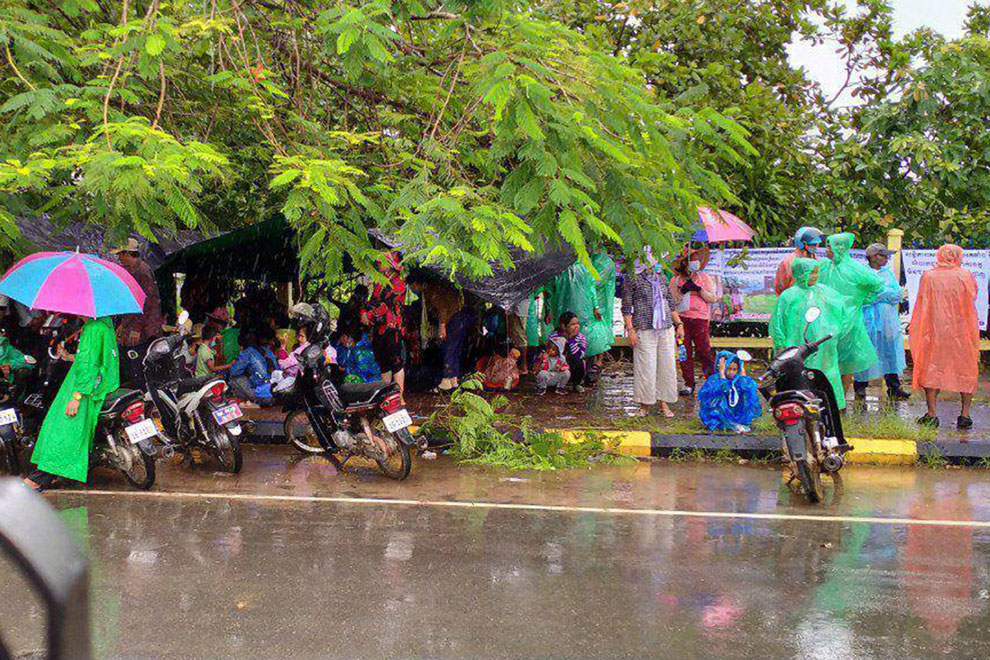 
Koh Kong: Authorities in Koh Kong province at 2 am on September 30 dismantled tents in front of the provincial hall to protest to speed up the solution. The land was detained and four protesters were taken to the Royal Cambodian Police Inspectorate for several hours before being released.

Nget Nhanh, 52, told the Post yesterday that more than 193 families had been affected by 2,209 hectares of land since 12 years ago. With Union Development Company in Prek Khsach commune, Kirisakor district, they have been protesting in front of the provincial hall since Monday, September 28 to ask for Accelerate the solution after the provincial and national authorities promised many times but still could not find a solution.

He said that when the protest reached 2 am on Wednesday, about 30 people were asleep in In the tent, the police came down to dismantle the tent and arrested 4 people, including 3 women aged 38 To 76 years old and a 59-year-old man, including confiscating 5 mobile phones, plates, pots and rice.

When we go to build a house after having children, get married and build a house separated from the parents, they go to dismantle it because It is said to be the company's land.

More than 100 families are protesting for land clearance from the company and for them to be issued land titles. . On Tuesday, six people's representatives were allowed to meet with the provincial governor, Mithona Phu Thong, and have been talking for about 2 hours.

Ms. Pov stated that the villagers asked the provincial governor to make a written and stamped contract, but Ms. Mithona Phuthong refused.

"If he promised to clear the land for me, he would write me a letter, but he said no," she said. Make a written letter. "So! They promised the wind with us for 12 years and made us suffer forever."

The residents claimed that they would continue to protest in front of the provincial hall even though the four detainees had been released. Case.

Koh Kong Provincial Commissioner Kong Mono confirmed that the four people were invited to the municipal inspectorate to stop camping in In front of the provincial hall to restore order to beautify.

"(Continuing the protest) Do not just pitch a tent, spoil the beauty of the city and affect the tourist area," he said.

Mr. Sok Sothy, Deputy Governor of Koh Kong Province, confirmed that the authorities did not evade the settlement as claimed by the people.

"This is beyond the jurisdiction of the provincial level and into the jurisdiction of the National Land Settlement Authority and the National Dispute Resolution Commission," he said. That land is he is studying the identity of the people to decide what to do and the province informed him is "Like all the time, there is information on how to update him."

Thong Chandara, coordinator of the Koh Kong-based Adhoc Association, said the arrests were an act of intimidation to stop protesting in front of the provincial hall.

He said: "They are to monitor the petition by the province did not answer and kept promising again and again. The promised day is that they came to the provincial hall as promised.