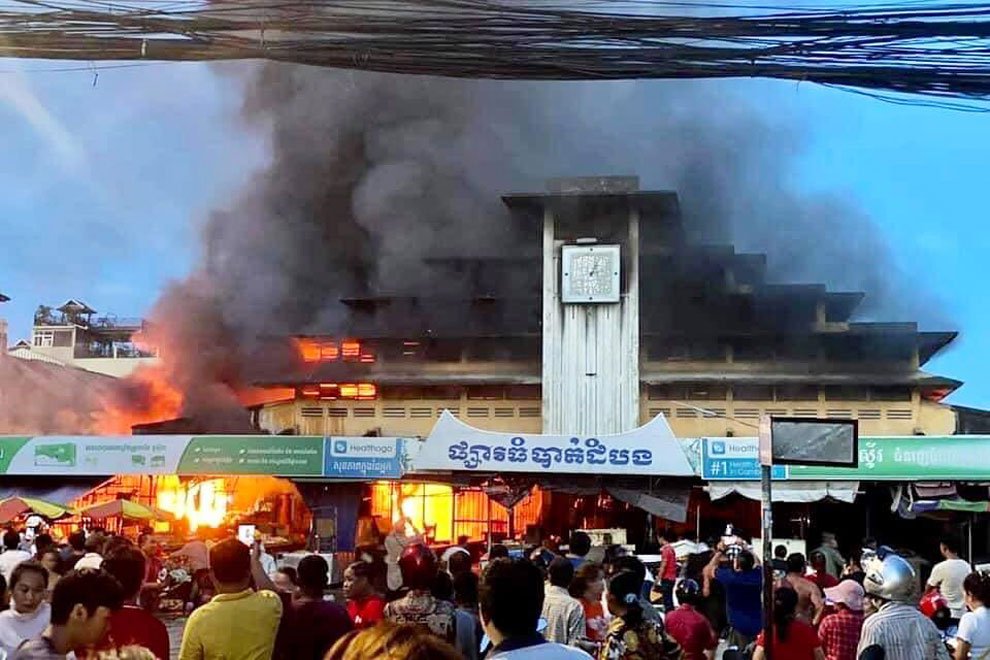 
Battambang: Battambang provincial authorities are in a hurry to restore order and clean up the environment in Battambang Central Market, called Phsar Nat after the fire. An electric shock caused damage to nearly 80 vendors' stalls.

Battambang Mayor Pheng Sethy told the Post that on Sunday evening, the Battambang Central Market, a nearly 100-year-old heritage building Was on fire. Thirty-three vendors' stalls on the north and west sides of the market were completely destroyed and 44 stalls were destroyed. Others have been severely affected.

"The fire was caused by an electric shock in the market, which spread to vendors' stalls," he said. Spices and sauces, dishes and clothes. "But it did not cause any harm or death to traders or citizens."

Mr. Sethy said that so far the Joint Commission has not yet assessed the extent of the total damage from the fire. No, because in the meantime, the coalition is working to restore order and clean up the environment in the market.

"The task ahead now is to clean up the market to restore the environment," he said. Helped to dismantle and transport the damaged waste from the market and set up security order to prevent theft, which led to traders "Even more losses."

Meanwhile, Mr. Soeum Bunrith, Deputy Governor of Battambang Province, who was appointed as the Chairman of the Commission for Resolving the Impact of Fire, told the Post at On Monday, the commission decided to dismantle the stalls around the market to maintain order and clean up the environment in Re-market. "Damaged goods cause bad odors, affect the environment and public health that need to be cleaned," he said. "Sanitation is urgent."

He said that in addition to cleaning up the environment, the commission urged the provincial electricity authority to re-connect the power line. Technical standards, because in the past, the management of power lines in this market was controlled by the private sector, which received a bid to continue the electricity supply business. From the states that make the wiring in this market "messy" prone to electric shock. At the same time, the committee urged the Battambang Provincial Water Supply Authority to study and reorganize the water supply network by setting up water pumps in Market and around the market to prevent fires.

He added: "Especially now, our committee has cooperated with the Department of Land Management, Urban Planning and Construction and the Provincial Department of Culture and Fine Arts to study. Assess the impact on the quality of the construction of this market to renovate in accordance with the technical standards and style of French heritage buildings . "This market was built in 1937, which is now 83 years old and is considered a heritage building."

He said the market had 551 stalls and 210 stalls. During the firefighting operation in the market, the police used a total of more than 40 trucks of water, and the operation was carried out three times. The first starts at 5:30 pm and ends at 8 pm on Sunday.

However, due to the pile of luggage, groceries and clothes were burning inside at 10 pm, the fire broke out again and the police The scene was extinguished at 10:30 p.m. At 3 am on Monday morning, the police saw the flames burning again and completely extinguished them. At 3:30 a.m. Monday.