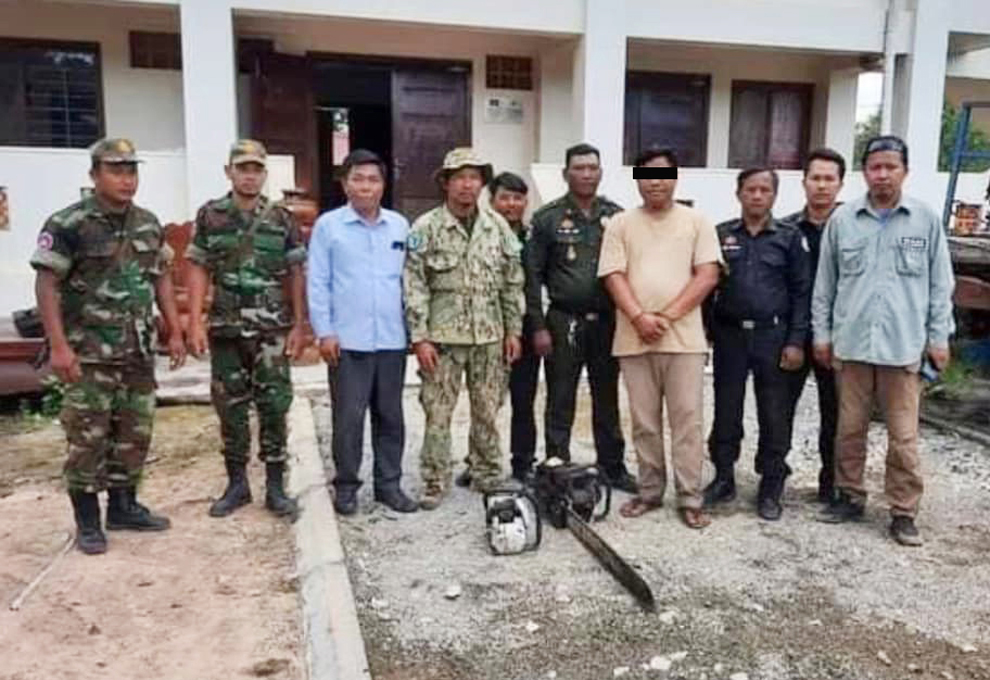 
Pursat: Pursat Provincial Department of Environment officials question a proud man As a two-star soldier of the bodyguards and went to cut down forest land in the border area Nearly 40 hectares of forest, Phnom Samkos, as private property, but were forced by white forces Veal Veng District Joint Task Force arrested on Monday afternoon.

Panh Morakot, director of the Pursat Provincial Department of Environment, told the Post on August 25 that the man was a suspect. Se Chamroeun, 42, lives in Stung Dach village, Bavel commune, Bavel district, Battambang province. At the time of his arrest, the suspect was not wearing a uniform and the police could not find him. The message confirms that he is a high-ranking military officer wearing two stars, just like that.

"At the moment, the suspects are being questioned by our environmental experts," Morakot said. Surrounding the case of clearing about 40 hectares of forest land in the area of ​​Phnom Samkos Wildlife Sanctuary. Suspect is also being questioned by a group of professional officers from the Department of Justice of the Royal Armed Forces of Pursat Province. The answer is also around the case, this person is bragging to the villagers and the local authorities that he is a military officer. "Two stars of the Angkor group."

In this case, Mr. Ung Ratha, Deputy Governor of Veal Veng District, who led the coordination force to crack down. Natural resource crime at Damnak Kanseng village, Bramoy commune, Veal Veng district, where The suspect told the Post that before the arrest, the suspect had been bragging about the illegal logging. Villagers and local authorities claim he is a two-star bodyguard of the bodyguards, and the suspect often wears a uniform. As a military officer wearing two stars as well. In addition, the suspects incited poor villagers to encroach on forest land in the border area. Mok Phnom Samkosakom sells at a low price.

"The suspect was arrested for a specific crime while clearing forest land," Ratha said. The above location was violated by law. In the arrest, our joint task force, which A group of rangers and Wil dlife Alliance experts seized two chainsaws and ammunition. Confiscated about 40 hectares of forest land or more from the suspects to be the property of The state.

According to Mr. Ratha, in addition to committing the crime of encroaching on forest land in the above area, the suspect was arrested Involved in many other crimes, such as boasting of being a star soldier 2 of the bodyguards and cheated to take money from some people in exchange for job offers Roles and roles within the framework of the Ministry of National Defense.

However, Eng Hy, a spokesman for the Royal Cambodian Armed Forces, told Phnom Penh on August 25 The police are investigating the case and will not comment further. Results are announced by experts.

Mean Viet, chief of Stung Dach village in Bavel commune, told the Post on August 25 that the suspect, Se Chamroeun Has been evacuated from many villages since the outbreak Pat Kovid 19 m.

He said that none of the villagers knew about the actual work of the above person. But this person bragged to himself that he was the deputy commander of the bodyguards and only He was wearing an army uniform and was carrying a pistol.

"This person said he was the deputy commander of the bodyguards, but did not," Viet said. It is not clear what the bodyguards are, ”he said.

As for Khun Ren, the police chief of Bramoy commune, he told the Post that the suspect was from the polls. The location of the first residence in Damnak Kanseng village was contacted for He became a brother and sister and told him that he was a two-star officer. Of the Angkor Party.

"During that time, I also considered him [Se Chamroeun] as a brother," Ren said. Dharma because he wears a military uniform, wears two stars and has a luxury car that I ride There is a low status, how can it be denied. But later I saw that he was not active, he hired the villagers to clear my forest land Prohibit him from doing it, but he did not listen, so I told the class "To take legal action."