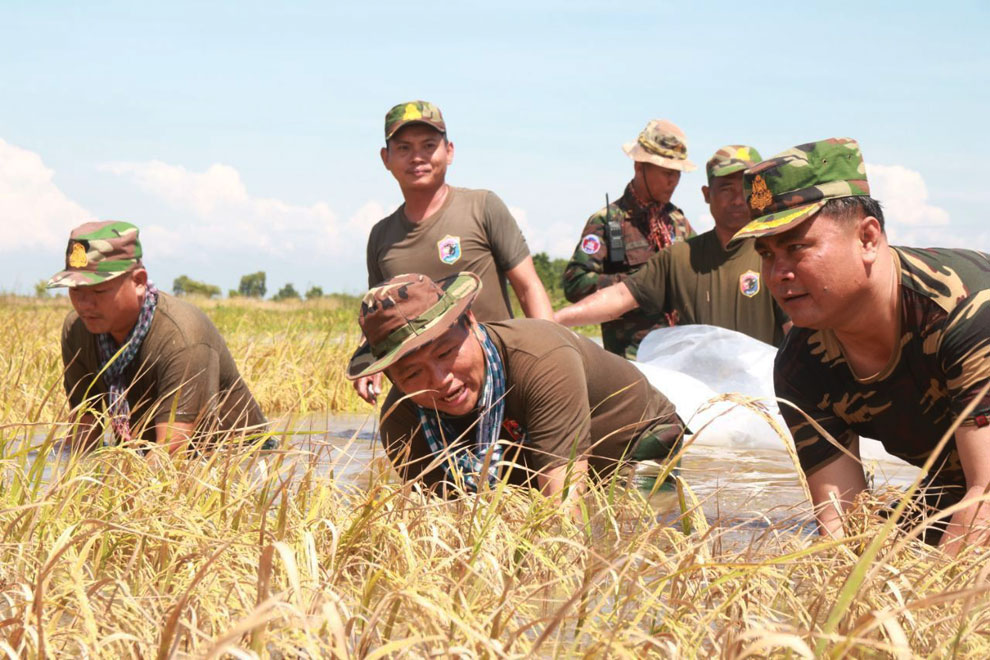 
Banteay Meanchey: As of Monday, the Mongkul Borei district authorities and a total of more than 500 troops have been continuing to harvest rice for more than 20 people. Hectares in Rohat Tuek commune, which was inundated by flash floods and runoff from the Bavel River.

Mongkul Borei district governor Rath Dasinang told the Post yesterday that the remaining 20 hectares of flooded rice remained. From drought damage at the beginning of the rainy season. The fields were ripe for harvesting, when the floodwaters rose and were overflowing. From Stung Bavel, Battambang province.

"We are very sympathetic to our farmers. At the beginning of the rainy season, the drought damaged thousands of hectares of paddy, and the rice is almost ready," he said. The harvest was also flooded. "We only mobilize officers and troops to help harvest their rice from the water so that there will be enough seeds for further cultivation."

According to Da Sinang, the flood-affected people in the area have been harvesting rice since Sunday. Eight hectares of rice was harvested and transported to people's homes by the army and local civil servants on Sunday. And on Monday, it is planned to harvest another 12 hectares of rice, otherwise the grain will rot. Of course.

Mr. Chhun Mao, Deputy Commander of the 5th Military Zone and Commander of the 1st Division in Banteay Meanchey Province, told the Post that the intervention helped to harvest rice. Citizens are the duty of the army because the army is the relatives of the people.

"The main task of the army is to protect the peace and prosperity of the nation and the people," he said. At this time, the people are facing difficulties due to the flooding of rice that is about to be harvested, so our army force of more than 500 people came together Help harvest rice from the water for them.

Harvesting rice in water is not an easy task, but if the rice is ripe and left submerged in water, it will make People's livelihoods are facing more difficulties. This is according to Mr. Kong Sopheap, Rohat Teuk commune chief, who led local officials to intervene to harvest rice for the villagers in Kramol village this morning Monday.

"We endure the hardships of harvesting rice in water rather than without harvesting it or leaving it damaged in the water while we There is a shortage of food due to the drought and the crisis of the Kovid 19 epidemic, which is affecting the socio-economic situation around the world. .

According to Mr. Sopheap, the water flooded the fields to a depth of up to the waist, which could not be used by harvesters, only harvesting By hand only. Seeing the hardships of the people, the Governor of Mongkul Borei District requested the troops from the 51st Infantry Brigade Command to intervene to harvest rice. As of Monday, it was the second day that the army had come to help harvest rice in the water. Citizens.

"Without the army and local authorities to help harvest the rice, I would have lost more than one hectare of my rice," he said. It stinks. "Early harvest this rainy season is not much, but it can help reduce the cost of buying new varieties of rice."