Archeological excavations in Toul Daun Pok discover the foundation of the temple, its materials and its location 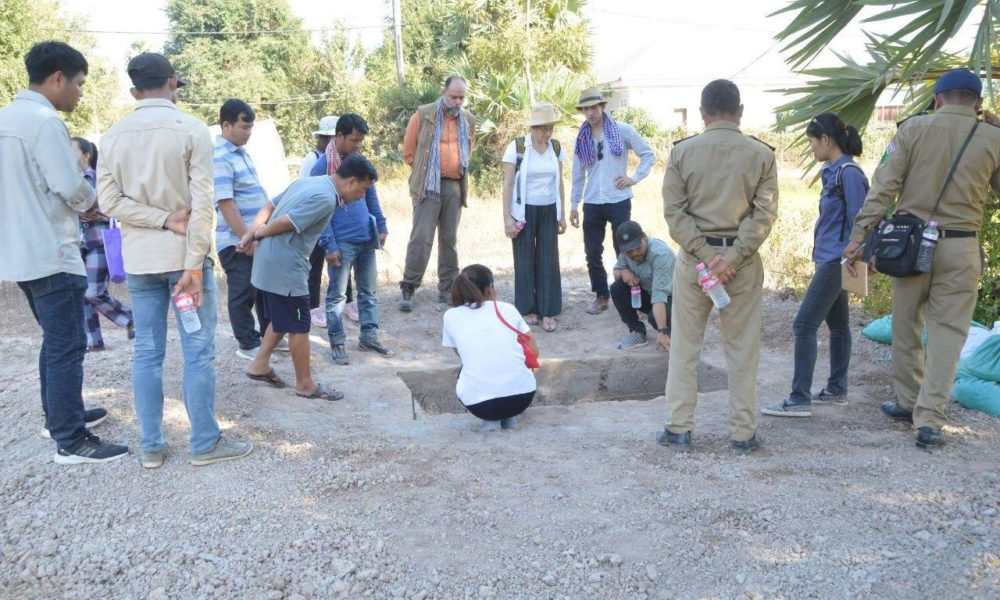 Archeological excavations in Toul Daun Pok discover the foundation of the temple, its materials and its location

Archaeological experts of the Apsara Authority in collaboration with the University of Hawaii, USA, conduct archeological excavations at Tuol Daun Pok, located west of Wat Vea temple, in the village of Siem Reap, Siem Reap province. December 2019, ending January 31, 2020. Preliminary results have uncovered the archeology of Tuol Dok Pok on the foundation of the temple, its materials, and its location for more than 1,000 years. According to the Ministry of Culture and the Ministry of Culture on January 20.

Tin Tina, deputy director of the Apsara Authority's International Center for Research and Documentation, said the search was done to find ancient villages, shrines and utensils outside of the capital, especially around Siem Reap. Recent discoveries are useful for studying the history of Khmer geography from the past to the present and contributing to the preservation of archeology in developing areas.

Heng Phirin, PhD, an archeologist at the University of Hawaii, and the head of the research project, said the team had conducted five archaeological excavations of a 1 1/2-meter-wide pit on Tuol Dok Pok and on the land of the people living near Tuol Sleng. Also. As a result, the excavation at Tuol Daun Pok found the foundation of the laterite and the brick above buried in a depth of more than one meter, with two pink pillars and a pile of sandstone in the hut. You're right. Presumably, the Dok Pok temple was built in the tenth century, roughly the same age as the temple of Banteay Srei and the Indra-Kokay temple.

As a result, the brick temple collapsed between the 12th or 13th century and is no longer a major religious site, only in Kutu, he said. This change probably coincided with the construction of the 12th or 13th Pagoda Pagoda, with people converting to worship at Wat Vea. In addition, both in the pit at Tuol Dok Pok and Kok village also found pieces of Chinese porcelain from the USSR. 12th to 17th and Khmer pottery produced at Nakhon Ratchasal, Phnom Kulen and Choeung Ek. 10 and 13 are solid, smooth and non-porous porcelain, including various items.

These indicate that the place they now live in (Toul Daun Pok) is an old ancestral village and has been inhabited for more than 1,000 years, dating back to the 10th century, with a brick structure and a The village lands around six temples. The fragments of porcelain suggest that the existence of Tuol Dok Pok existed at least to the 18th century.

Archaeologist Phirum Phirom of the Apsara International Research Center and the Angkor archives of the Apsara Authority said that, as a result, the excavations at Toul Daun Pok show a great deal of evidence regarding the ancient human settlements of the south. Angkor, whose castle is the center of a community. The temple is well maintained and people living around have daily living and worship materials. The piece of marble can explore ancient economics and human life. In addition, trade movements and the use of imported pottery from China, such as the Ming and Cheng (little) Green Pottery in the Vietnamese and Song Dynasties, as well as domestic pottery. Etc.

Phuong said that these results are not comprehensive, as preliminary results and future research plans to find out the size of the temple we see how it is compared to other temples. In the meantime? Is this a system of village planning and ten ARVs?

Archaeologists also noted that, in collaboration with the University of Hawaii, it is an excellent opportunity for the dissemination and protection of the archeology of southern Angkor, for the region is now underdeveloped and land use requirements are high. Poses a significant risk to the monuments in the area.