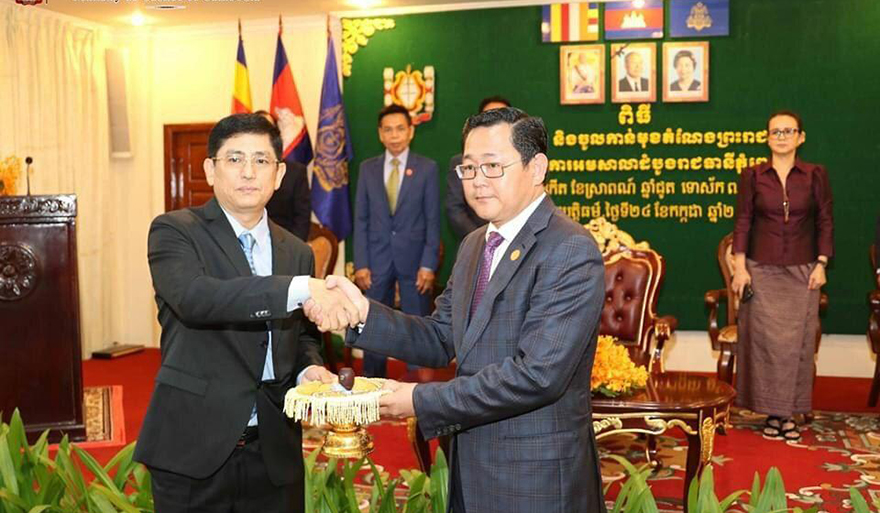 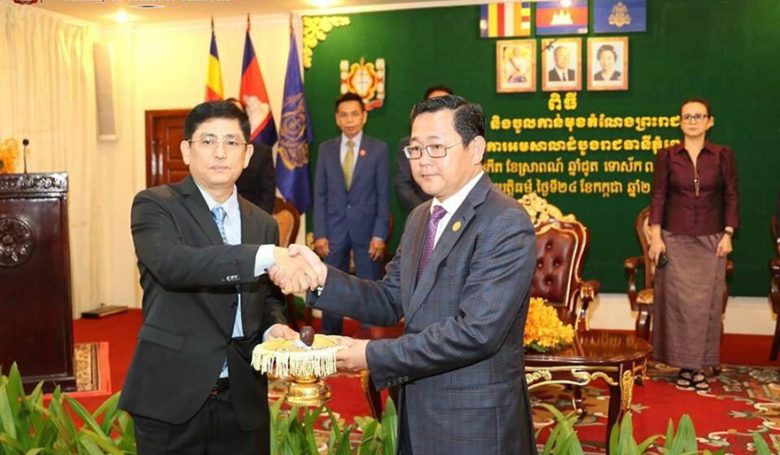 Phnom Penh: On the afternoon of July 24, 2020, at the office of the Ministry of Justice, a transfer and inauguration ceremony was held. The Prosecutor of the Phnom Penh Municipal Court under the high presidency of Mr. Keut Rith, Minister of Justice.

The above ceremony was also attended by Mr. Khuong Sreng, Governor of the Board of Governors of Phnom Penh, Member of the Supreme Council of the Magistracy. , Leaders of the Ministry of Justice, Mr. You Buntbeng, President of the Court of Appeal of Phnom Penh, Mr. Ouk Savuth, Attorney General of the Attorney General The Phnom Penh Court of Appeal, including judges, prosecutors, court officials and many other civil servants.


During the ceremony, the Minister expressed his appreciation and gratitude to Mr. Khuong Sreng, as well as local authorities and relevant units. All levels in the past have supported and provided good cooperation to Mr. Keo Sothea to perform his role effectively.

The Minister strongly believes that Mr. Chreung Khmao will work hard to fulfill his duties with a high sense of responsibility in leading Prosecution of the Phnom Penh Municipal Court to grow to another level, especially to strengthen better cooperation with the court Phnom Penh, as well as all competent authorities and law enforcement officials in a spirit of mutual respect, based on their roles and responsibilities. Give the law to each and wish Mr. Chreng Khmao success in this task as the new prosecutor in the capital. Phnom Penh, the heart of the Kingdom of Cambodia.

On this occasion, to improve the quality of fair and just trials, as well as to improve the provision of justice. To make it easier, faster and cleaner, the Minister introduced Mr. Chreung Khmao, the new Prosecutor of the Phnom Penh Municipal Court, as well as Mr. Taing Suntabay, President of the Phnom Penh Municipal Court, and all of you, judges, prosecutors, court officials and all civil servants of the court and prosecutors accompanying the court Phnom Penh, as well as at other courts across the country as follows:

First, judges, prosecutors, as well as all court officials must adhere to the five noble approaches of Samdech Techo Prime Minister: "Mirror" Bathing, scrubbing, treatment and surgery »to be a principle in the performance of its functions and duties, as well as in leading the tribunal unit .

Second, judges, prosecutors, as well as all court officials must adhere to their strictness in applying the law properly to provide A biased trial to ensure fairness to the people, especially the avoidance of The four virtues are will, willpower, instinct, instinct and delusion, as all judges and prosecutors have sworn in before taking office.

Third, judges, prosecutors, as well as all court officials, must strictly adhere to the discipline and professional ethics of both judges and prosecutors. During work and in daily life. Adherence to its professional ethics is an important contribution to the promotion of the honor, dignity and prestige of the judiciary itself. It is an indispensable contributor to strengthening public trust in the justice sector.

Fifth, judges, prosecutors, as well as all court officials and civil servants must pay attention to their work by strengthening internal unity and strengthening their duties. Good cooperation with relevant authorities and institutions to ensure the proper functioning of the judiciary as well as the effectiveness of Provide justice services properly to the people.

"The Ministry of Justice and the Supreme Council of the Magistracy will continue to strengthen the disciplinary, ethical and cleanliness of the judiciary to promote "More honor and dignity of the Magistracy."