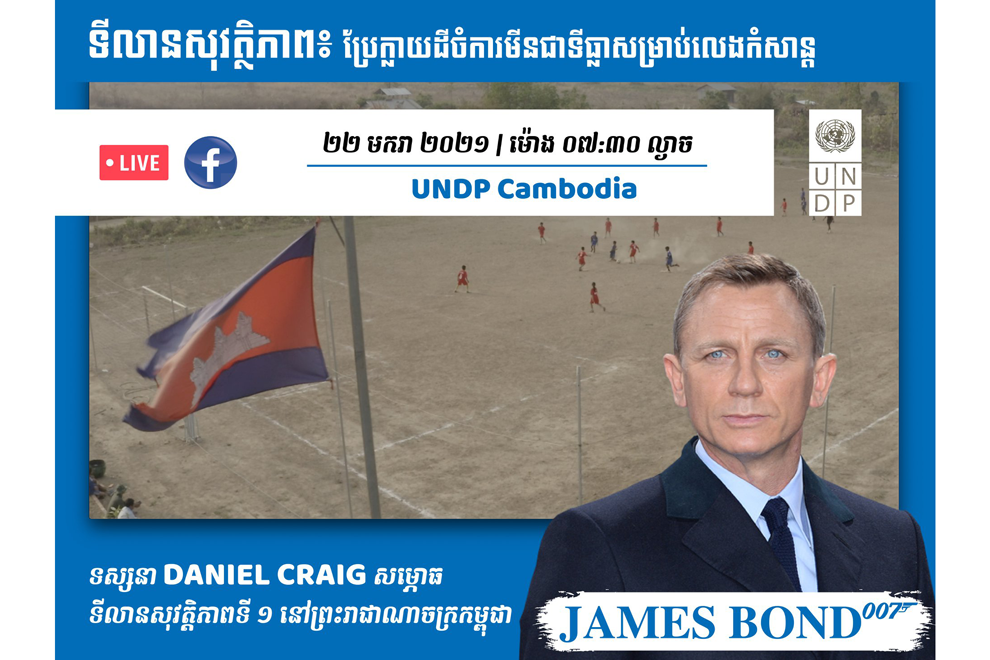 
Phnom Penh: Well-known top actor, commonly known as 007, James Bond or (Daniel Craig) will attend the inauguration of the first safe haven in The Kingdom of Cambodia LIVE at 7:30 pm on January 22 on the Facebook page of the United Nations Representative in Cambodia .

UN envoy to Cambodia Nick Berez Ford told the Post yesterday that Daniel Craig was seeking universal support for the United Nations. For the elimination of landmines and explosive remnants of war. In a live broadcast on January 22, Daniel Craig will meet with Mr. Ly Thuch, First Vice President of the Mine Authority.

Nick Berez Ford says Cambodia's first safe haven means turning minefields into a safe haven For children to be able to study or play other sports, and the main goal is to eliminate all mines from Cambodia by 2025 .

"Our main goal is to make Cambodia a landmine-free country by 2025," he said. We are pleased to have the participation of Daniel Craig, United Nations Global Advocate for Mine Action and the Dangers of "The bomb exploded."

Nick Berez Ford says the Cambodia Safe Park campaign will begin in a small village in Battambang province, located at Stung Touch Krom Primary School, because it has Important for the wider community. The school is located on land cleared by the Cambodian Mine Action Center (CMAC) and UNDP.

"The school grounds are an important part of the community, bringing together different football teams to play and practice," he said. UNDP has recently provided additional support to schools by restricting play at different times and has built shelters for visitors and Provide other necessary sports equipment.

Senior Minister and First Deputy Chairman of the Mine Authority Ly Thuch told the Post yesterday that the Royal Government of Cambodia wanted world-class dignitaries to attend. In the field of mine action in Cambodia to help disseminate the scope of impact in the mine sector in Cambodia and to help raise awareness of Regional and global mine risk, and through the activities of celebrities will be able to mobilize human resources to support the clearance sector Mine too.

"We have worked with UNDP and have been very successful and have been welcomed by James Born, also known as Daniel Craig," Thuch said. Ready to come to Cambodia, but because of Kovid, we also do a video conference on the night of January 22. "

The UNDP Facebook video conference was organized to raise awareness of the impact of explosive remnants of war. In Cambodia and inform the international community, as well as mobilize financial resources to help the demining sector in Cambodia.

Through James Bond's participation, it is a wake-up call for international donors to be able to recall the impact of waste. From the war and may be more involved in helping Cambodia.

Mr. Thuch said: "We take the video or his activities to disseminate at international conferences, annual mines or other major meetings. So, no matter how many countries are involved now, it is just an indirect way to wake up donors so that they can think about things. That should help the sector or not.

However, Mr. Ly Thuch stated that the Kingdom of Cambodia has about 800 square kilometers left across the country. Especially in the provinces bordering Thailand, therefore, it is necessary to clear more than 100 square kilometers per year to achieve the plan. The Royal Government must clear all mines by 2025.