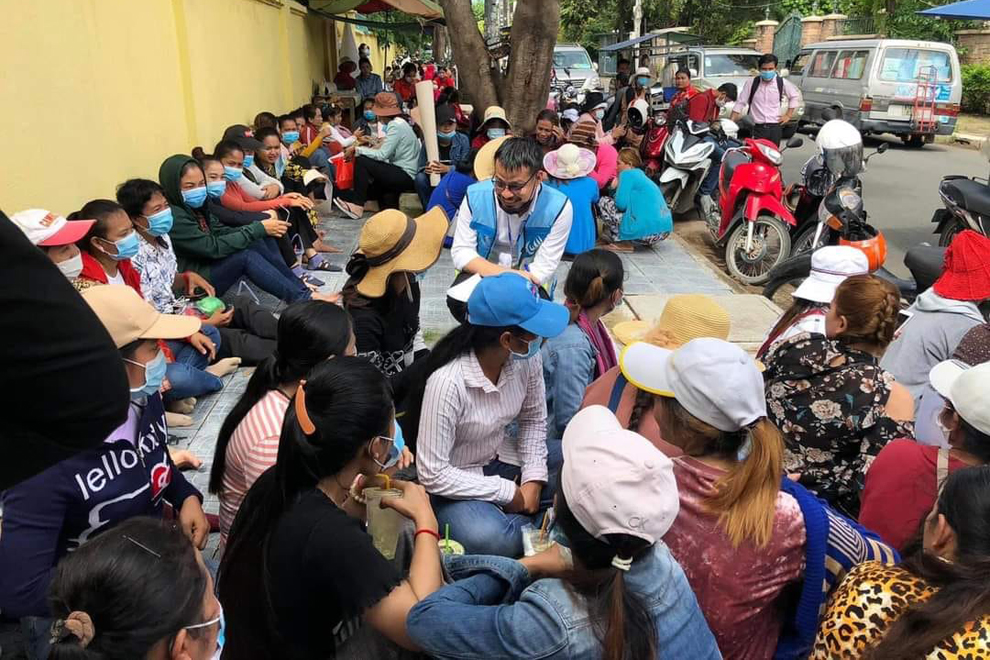 
Phnom Penh: As many as 250 workers, representing 1,284 workers, gathered yesterday in front of the European Union (EU) headquarters to protest. In Cambodia to request this institution to intervene for the closed factory to resolve the benefits for workers in accordance with the law.

According to the workers' petition submitted to the European Union (EU), the factory's factory located in Trapeang Chhouk village, Sangkat O Bek Kam, Khan Sen Sok has suspended the workers. Two months from May to June 2020. The petition states that at that time, the company announced the closure of the factory on July 1, 2020 without addressing the benefits. To the legal workers on the labor.

The workers' petition states: "Request the European Union in Cambodia to help find justice for the workers at the factory. The company pays workers 4 points. Request the company to pay workers who are 4 months pregnant or more to receive 50% from the company for 3 months Of maternity leave money.

In addition, the workers also asked the European Union to intervene to the company to pay for 5 days of the New Year holiday and asked the Ministry The case of referring the case of the dispute over the factory to the Arbitration Council.

Ung Chanthoeun, a worker representative who submitted a petition to the EU yesterday, told the Post that the EU had promised to look into the matter. On the request of workers and push this to the buyer to resolve these disputes.

"As workers and some of us, we are still willing to seek intervention from other relevant institutions," she said. "We hope that we will get justice according to the law and want the factory to respect the law and provide what the workers have to get."

But Bou Samnang, administrative director of the White Olate factory, said the petition to the European Union would have no effect on the company. Because the factory has resolved according to the law and the announcement of the Ministry of Labor by providing workers with three points in response to the closure Factory already.

He said that these solutions also have the support of the Ministry of Labor, with many workers have come to accept these solutions. "What he demanded was different and what we did was in accordance with the law and with the participation of Ministry. I also do not know why he still demands.

"The conditions we have given him are the last salary, the annual salary and the seniority allowance and it is time," he said. "More than 900 workers have come to accept this condition and will continue to do so."