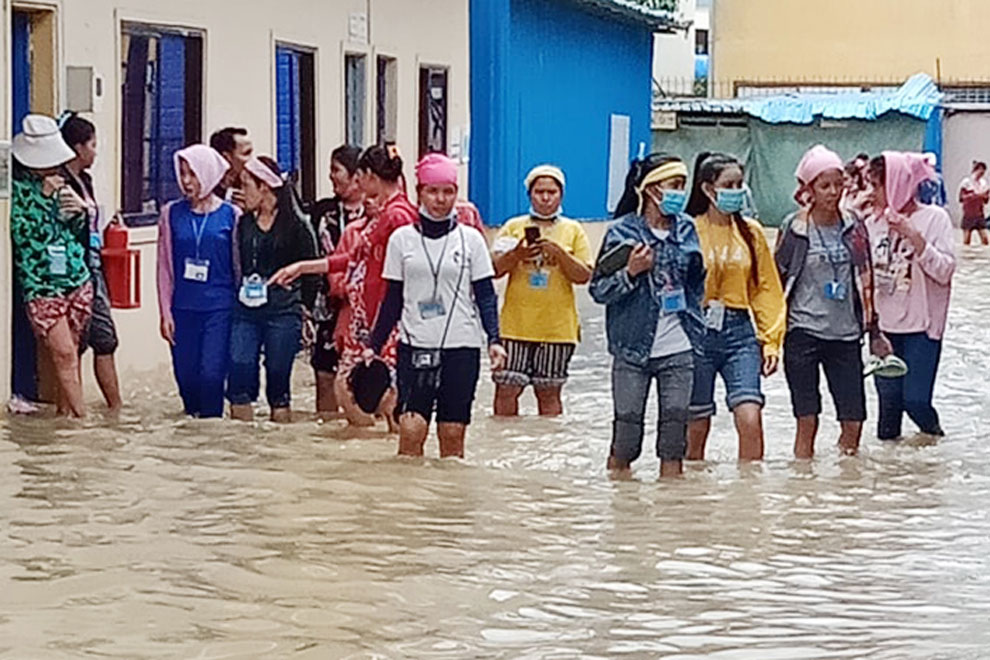 
Phnom Penh: 79 factories in Phnom Penh, Kampong Speu and Kandal provinces were affected by the floods, of which about 40 factories were suspended Temporary production chain.

Heng Sour, a spokesman for the Ministry of Labor and Vocational Training, told the Post yesterday that the 79 factories affected by the floods and Affects more than 40,000 workers. "These affected factories will improve and there will be fewer and fewer factories," he said. "Flooding) on ​​Monday."

As of October 17, 62 factories in Phnom Penh, 13 in Kandal province and 4 in Kampong Speu province were affected by the floods. "About 40 factories were severely affected, resulting in a temporary suspension of production, but more than 30 other locations," he said. "Continues to work normally."

Chak Borin, director of the Kampong Speu provincial Department of Labor and Vocational Training, told the Post yesterday that four flooded factories had reached the factory grounds. The production chain was not affected and workers continued to work normally.

"The department continues to monitor both the factory and the workers, where the workers are in trouble, we help to facilitate," he said. They are like workers traveling, encountering traffic jams or delays during working hours, we coordinate with all of them with the factory owner "

According to Borin, the Department of Labor has partnered with unions and factories to facilitate factories to provide convenience for workers in their case. There was a problem traveling. In Kampong Speu province, there are 145 factories still in operation and only 9 factories have suspended workers due to the impact of Kovid 19 and about 2,000 workers were affected by the suspension.

Kaing Monica, deputy secretary general of the Garment Manufacturers Association of Cambodia (GMAC), told the Post yesterday that it was "unfortunate" that the floods had occurred. Up in Cambodia in parts affecting GMAC member factories, most affected by withdrawal Parts of the EBA and the decline or loss of orders due to the spread of Kovid 19.

Mr. Monica added that this is a crisis for factories in Cambodia and for factories affected by the floods, despite the water Although the factory has not been able to start immediately due to the need to clean and check the machine and other equipment. The other affected.

He said: "In case we can not continue the production process due to factors inside and outside the factory, so the request from the association To the Royal Government, especially the Ministry of Labor, to request permission, especially the suspension of work, should be granted as soon as possible. "The special permission is that it may not be necessary to follow all the procedures as required by law because it will take a long time."

Man Seng Hak, vice-president of the Free Trade Union Federation, said that for workers and his union at the grassroots level, there was no impact from the floods. However, he asked the factory owners and local authorities to take timely action to the affected workers. The flood.

"My union continues to monitor the information of all local unions and to be very careful to avoid any risks," he said. High to them.

Last week, the Ministry of Labor instructed factory owners, enterprises and workers in flood-prone areas to be monitored. Regularly prepare meteorological forecasts and prepare safety guidelines and evacuation methods during floods. Pay close attention to the place where the chemicals are stored and close the chemical storage container to avoid Leaks affect the health of workers and citizens.

At the same time, the Ministry also instructed workers to follow the instructions to cooperate with employers to prevent the influx of rain and floods. Stay away from sources or wires that conduct electricity.