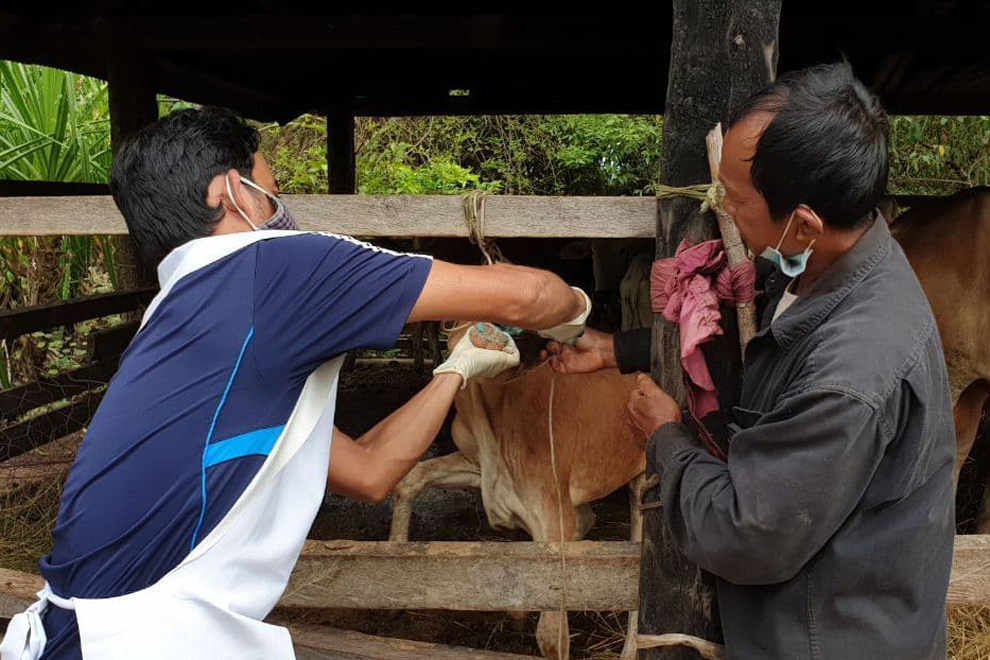 
Kratie / Kampong Chhnang: Sixteen cattle in two provinces, Kampong Chhnang and Kratie, have died in the past two weeks. Livestock officials in both provinces claimed that the cattle died of foot-and-mouth disease and measles.

Ket Saroeun, director of the Kratie Provincial Livestock Office, told the Post on March 2, 2021 that after reports from residents living in the commune Kampong Cham, Sambo district, about the cases of cattle and buffaloes dying, he asked the village veterinary agency to search for the cause to intervene. Treat cattle for the people.

"According to the results of our veterinary research, cattle have died from foot-and-mouth disease," he said. Water.

According to Saroeun, foot-and-mouth disease can kill cattle if not properly fed and watered. And vaccination in advance. Through interviews with cattle owners and diagnoses of dead cattle in the area, most Mouth sores or ulcers of the mouth and toenails are symptoms of foot-and-mouth disease, while some cattle have symptoms of bloating and stiff neck. Which is a symptom of dehydration because they are left in the forest to run their own food without being brought in Vaccines.

He added that on the afternoon of February 26, 2021, eight cows died near a pond in a cashew plantation. Location at Otakuch point, Yav village, Kampong Cham commune, Sambo district. The corpses had black bruises on their toenails and blisters all over their mouths, and some had abnormal bloating. The same case was found on February 17.

Yoeun Pina, a 30-year-old farmer in Yav village, Kampong Cham commune, Sambo district, who had two cows, told the Post that By mid-2019, he had vaccinated his cows against measles and mumps. "I do not know if they can get foot-and-mouth disease from herds of infected villagers," he said. "Because I have already vaccinated against these two diseases."

According to data obtained from the Kratie Provincial Livestock Office, about 60,000 cows out of a total of nearly 100,000 head of cattle in The province is vaccinated against both diseases every year. Vaccination is free of charge.

Separately, in Kampong Chhnang province, there are also cases of cattle dying.

"According to the physical inspection, the dead cattle were caused by foot and mouth disease, because in addition to wounds "Blisters in the mouth and toenails are swollen and stiff in the neck."

According to Mr. Kreung, there are a total of 200,000 cattle in Kampong Chhnang province, but vaccines are given for vaccinating cattle. Only 70,000 per year due to limited vaccination of these two diseases, especially foot-and-mouth disease vaccine .